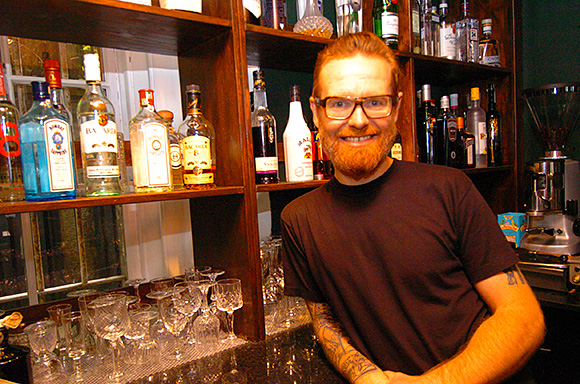 Inspired by their love of premium spirits and cocktails, the pair, who own gin bar Bramble on the city’s Queen Street, have revamped and relaunched their Stockbridge gastropub The Saint as The Last Word Cocktail Saloon.
As Jason told SLTN, the move made sense for them on a number of levels.
“We had been running The Saint for about two and a half years and it was doing really well but doing food did bring us some new challenges,” he said.
“Mike and I are spirits enthusiasts; for us it’s all about crafting cocktails for our customers – we get a huge amount of enjoyment out of that.
“So we moved to a business model similar to that we have at Bramble, where it’s spirits and cocktail-led.
“Maybe it [food] is a control thing too. Now we’re not relying on a chef, we can control the spirits and cocktails ourselves.”
The bar, based on St Stephen Street, has been given a new look to reflect the revised strategy.
A colour scheme of dark green (walls), and gold (ceiling), provide the backdrop to a design Jason describes as “darker and more pubby”, with reclaimed furniture, taxidermy and “other oddities” dispersed throughout.
Food has all but disappeared from the venue, replaced by a range of toasties: The Doppio (Mozzarella and Cheddar cheese on brown bread), The Elvis Presley (banana, peanut butter and bacon on white) and The Heston (Nutella and raspberry on white). Snacks, including olives, pickled eggs, mixed nuts and pickled onions, also feature.
And there have been equally big changes when it comes to drinks.
Having established a reputation for cocktails at Bramble, Jason and Mike were keen to push the boundaries even further at The Last Word, which takes its name from a drink created in the 1920s.
The list features around 12 cocktails, including three signature drinks: The Last Word, The Final Ward and Mum’s the Word.
But it’s the steel-aged Six Cylinder Cocktail that’s caused the biggest stir.
With barrel-aged cocktails already a feature at Bramble, Jason had moved on to exploring how spirits marry in steel vats.
He was keen to develop a steel-aged cocktail for The Last Word and worked with Bacardi Brown-Forman Brands (BBFB) to perfect the Six Cylinder Cocktail – a blend of Bombay Sapphire gin, Martini Rosso vermouth, Martini Dry vermouth, Cherry Heering, Campari and Dubbonet.
The drink is ‘aged’ in a one-litre steel vat for six months before being transferred to 100ml steel cylinders with bespoke labels. Priced at £7.50, the drink is served to customers in the cylinder on a bed of crushed ice.
The unusual serve – which involves customers pouring the drink themselves from the cylinder – has been well received, with Jason saying it has given The Last Word a point of difference.
“The cylinder is given to the customer as it is and they pour it, which gives them ownership of the drink,” he said.
“The Six Cylinder is an old cocktail and I knew what I wanted to do with the steel ageing so I asked Bacardi if they wanted to get involved; they got on board and we had a tasting and looked at labels. It’s great to be working with a reputable brand.
“Innovation is what it’s all about with cocktails; it’s difficult to find something different but we’re trying to offer a USP without bamboozling people.

There’s still huge interest in cocktails, which is great. If the market wasn’t there we wouldn’t be doing what we do.

“There’s still huge interest in cocktails, which is great. If the market wasn’t there we wouldn’t be doing what we do.”
Joey Medrington, account development manager for Scotland East at BBFB, said the trend for aged cocktails is growing.
“Aged cocktails are very popular and current,” he told SLTN.
“The Six Cylinder Cocktail fits perfectly with Bombay Sapphire’s position as the spirit of imagination.
“Jason and Mike are really interesting to work with and they choose brands on their merits.
“It’s about how far people take it and they are real innovators.”