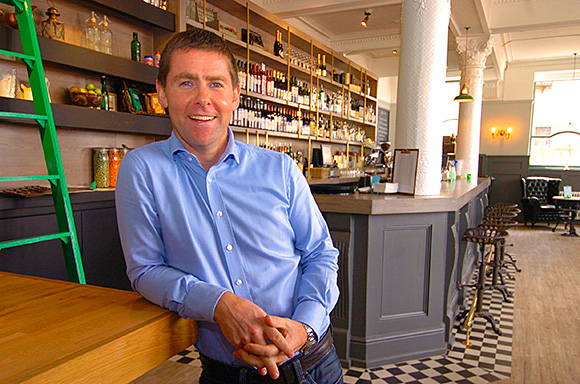 MICHAEL McGuigan is not one to shout about his achievements.

In fact, the operator admits his Shilling Group pub company has flown “slightly under the radar” up until now. But there’s been plenty going on.
Michael has spent the last ten years steadily building a portfolio of six pubs in the capital and one in the Borders.
The latest to join his stable was The Fountain – a traditional pub on Dundee Street which he relaunched in May following a root and branch refurbishment. Outside of Edinburgh, he has also bought the food-led Fisherman’s Arms in the Borders, which is being run by previous owner – and good friend – Peter Curran.
It’s an impressive tally for someone who never planned on a career in the licensed trade.
Having spent much of his childhood on the farm belonging to his uncle and grandfather, Michael had a passion for agriculture – a subject he went on to study in Edinburgh.
It was as a student that he began working in bars around Edinburgh and promoting his own club nights, before going on to manage La Belle Angèle nightclub just off the Cowgate.
His stint at the club, which was subsequently destroyed in the Cowgate fire of December 2002, gave him the taste for the trade and he went on to lease a bar – The Human Be-In – from Caledonian Heritable in 2000.
Three years later, Michael bought his first freehold – Thomson’s Bar in Morrison Street – and, after off-loading the Human Be-In in 2006, went on to snap up Carriers Quarters in Leith in 2006, The Pond, also in Leith, two years later, and Bar Kohl and the Golden Rule in 2009.
Earlier this year, The Fountain, which was part of tycoon Robert Tchenguiz’s now defunct R&L Properties, became his sixth outlet in the capital.
Michael said it took two visits to the outlet to convince him it was a good fit for Shilling Group, not least because the Golden Rule is just around the corner.
“I looked at it the second time and the penny dropped,” he told SLTN. “I knew then that if I didn’t do it someone else would and it could impact on the Golden Rule.
“Plus it was a great opportunity. People are moaning about the recession but there are huge opportunities out there costing far less than they would have done before the recession.”
Conceding that accessing funds for trade businesses generally remains challenging, Michael said he has established good relationships with both RBS and Bank of Scotland.
“I’ve got two companies and two banks,” he said.
“I didn’t plan it [like that] but it works. You’ve got to jump through more hoops than you used to but I think I’ve become better at knowing what they want. I’ve got a lot more knowledge because of what the banks are asking for.” 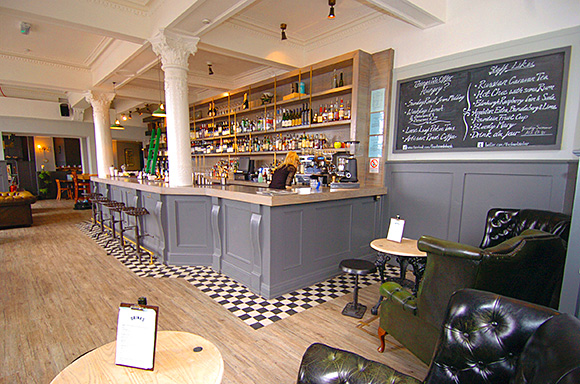 With the acquisition of The Fountain complete, the operator wasted no time in putting his own stamp on the place.
Edinburgh-based design firm GLM was tasked with creating a fresh new look for the venue, which Michael said had “hit the nail on the head”.
The six-week project, which cost £140,000, saw The Fountain’s traditional interior replaced with a bright and airy white and grey colour scheme.
New flooring has been installed, the kitchen and toilets have been revamped and the bar shortened.
Both the main bar and raised dining areas are furnished with mismatched second-hand tables and chairs and leather Chesterfield-style sofas and armchairs; while objects, such as cobblers’ wooden shoe moulds and suitcases, add to the quirky theme.
“Pretty much everything is second hand, which obviously helps with the budget and it’s quite ‘in’ just now,” Michael explained. “It came in on time and on budget, which really helps when you’re dealing with banks. GLM got it exactly right.”
It seems The Fountain’s customers agree. Michael said the pub’s fresh new look and food and drink offer (see story left) are helping attract a steady stream of young professionals and families living in the area, as well as visitors to the Fountain Park entertainment and leisure complex opposite. Trade is 40% up on what he forecast ahead of the launch, he said.
Buoyed by the success, Michael has more Edinburgh outlets in his sights.
“There’s no target number,” he said.
“A lot of factors need to be in place so there’s no point in saying ‘I want to open three pubs next year’. The obvious one is finance and that we’re ready as a team and it’s the right unit.
“I’ve always got five or six [outlets] in the pipeline and they all might fizzle out but one might drop and we’ll go for that.
“At this stage I think there’s still plenty of room for manoeuvre in Edinburgh, but there’s no target. The even longer term plan might be agriculture – I miss it!”

Images – Move any Fountain: Michael McGuigan added The Fountain to his Shilling Group earlier this year and carried out a six-week revamp of the pub.