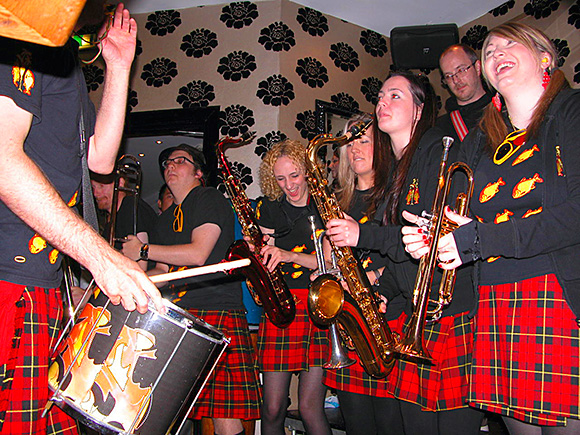 LARGS was alive to the sound of music for three days earlier this summer, bringing a welcome boost to pubs, clubs and other businesses in the seaside town. And it was thanks, in large part, to the efforts of local operator Stephen McDonald.

With live music a regular feature in his own venues, Room and Lounge, Stephen was asked to stage the inaugural Largs Live – which took place from June 29 to July 1 – to aid the town’s application for BID (Business Improvement District) status, a government-led scheme aimed at delivering town centre regeneration across Scotland.
The idea was to convince local businesses to get behind the application, which goes to the vote in September, by illustrating what could be achieved when SMEs collaborate on a project to benefit the area.
“We wanted to showcase what pulling everyone together could achieve – and what better way than by bringing between 5000 and 10,000 people to the town over a weekend and to give them a good experience to go home with,” said Stephen, who committed 150 hours of his own time to the project.
“We had seven weeks from concept to application, so it was quite an ambitious project, but very do-able.
“You can’t really advertise anything any more than four weeks in advance, so we broke it down into three weeks of planning and four weeks promotion, and a weekend of implementation.
“Twenty venues, 48 bands, 60 gigs – that was original tagline on all the literature, but we certainly weren’t going to hold it back. We ended up with 21 venues, 65 bands and 78 gigs – everywhere you went there was something going on.”
The event would ultimately exceed all expectations, with headliner – and Irvine girl – Eddi Reader closing a hectic weekend that benefited not just pubs and clubs, but chip shops, gift shops and hairdressers.
Looking back, Stephen said the pre-event publicity push had been pivotal to the festival’s ultimate success.
Some 10,000 flyers were distributed, 70,000 direct to households, including around Glasgow and Ayrshire, and 5000 to the local Largs community. Stephen also led a team handing out publicity material to commuters in Central Station the Friday before the festival; with QR codes printed on the flyers, train travellers with smart phones could access all they needed to know about the event and links to the artists taking part.
When it came to booking bands, the operator made the most of contacts built up through promoting live music at Lounge and Room, where the likes of James Grant, Hue & Cry and Benny Gallagher (of Gallagher & Lyle) have tread the boards. Stephen said he did face a dilemma when it came to booking a headline act to close the festival, though.
“Initially, I didn’t want a big name because we didn’t want to take any risks,” he said.
“For an artist like Eddi Reader, in a venue such as Vikingar…it’s £7500 before you have even sold a ticket.
“As a committee, we just didn’t want to be seen as wasteful of public money, so I actually took that risk myself. I had to sell 400 tickets to break even, and anything over and above that was profit. We managed to sell 450.”
Buoyed by this year’s success, plans are already afoot for Largs Live II, which will take place from June 28-30, 2013; potential headline acts in the shape of Gallagher & Lyle and The Proclaimers have already been approached to headline on the Friday and Saturday nights, and plans are in place to run musical workshops and more street theatre, a big hit this year.
While funding to the tune of £20,000 came from the local economic development and tourism fund for this year, he’s hoping more will flow next year from BID status and sponsorship, perhaps from drinks companies.
Stephen, though, is hoping to take more of a back-seat next year.
Should local businesses vote in favour of creating a Largs BID, a town centre manager will be recruited to market the event and, hopefully, generate nationwide coverage.
For the trade and local business in Largs, including his own, Stephen said the experience has been a major bonus. “If ever Largs harked 50 years back it was that weekend,” he said.
“It was like being in a post-war holiday town in the west of Scotland, that’s what it felt like. Not only has it exposed Lounge and Room as music venues, it’s opened Largs up as a place for up and coming acts to perform.”
• BID schemes are funded by local businesses, with amounts contributed based on the rateable value of the non-commercial property.

Image – An eclectic range of artists performed over three days at Largs Live in Ayrshire earlier this year.