Lessee hands over Edinburgh pub to employee of 23 years 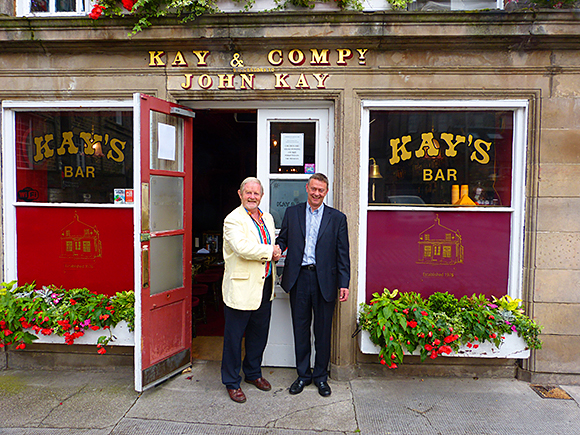 AN Edinburgh cask ale pub has changed hands – but the new man charged with running the establishment is well kent to regulars.

That’s because David Mackenzie, the retiring leaseholder of Kay’s Bar, has passed the reins to right hand man Fraser Gillespie, who has been manager at the Scottish & Newcastle Pub Company-owned outlet for 15 years and an employee since 1989.
Mackenzie, who took over the Victorian bar on Jamaica Street 24 years ago this month, said Gillespie is the right man for the job.
“Fraser came to me in January 1989 as a part-timer but after about four or five months he was working 40 hours a week,” he explained.
“He has been with me all that time and I made him manager about 15 years ago. People gave me a chance when I was younger so it seemed right to return the courtesy.
“He has been at Kay’s for 23 years and knows the bar very well so I just felt I had to give it to the guy who has put in the time.”
Gillespie described his former boss as a “hard act to follow”.
“There will be a few changes behind the scenes but nothing the customer will notice too much,” he said.
“That’s one of the things that appeals to our ‘irregular regulars’ who often say it’s nice that nothing has changed since their last visit.
“I’m quite good at what I do and I feel comfortable doing what I do. I can be a shoulder to cry on, can give golf and fishing advice and can throw somebody out if I have to.
“It’s a super bar with a lot of good customers and a heck of a nice place to be.”
Gillespie fully expects his mentor to make an appearance at Kay’s on a regular basis but Mackenzie insisted he’ll be restricting his activities to the other side of the bar.
“We had a do on Sunday night and all the regulars were telling me I’m going to miss it,” he added. “I said, ‘I know I’m going to miss it but I know I’m going at the right time’.
“I’m not going to hanker after it because I don’t have the burning desire I once had. I’ll be 70 at my next birthday so I’ve done okay and given it a good shot. I’ve enjoyed every minute of it and the customers have been fantastic.”
Mackenzie will continue as leaseholder at the Blue Blazer on Spittal Street but says he will not be involved in the day-to-day running of the bar.

Image: David Mackenzie (left) has handed over the reins of Kay’s Bar to Fraser Gillespie.