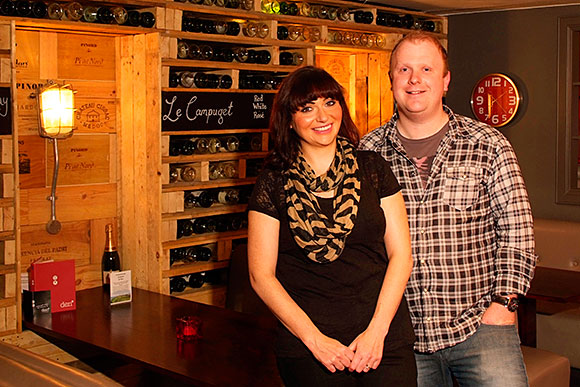 RUSSELL Buchanan and Caroline Smith aren’t the first operators to attempt to bring a touch of city style to a suburban town. But their track record suggests they’ll succeed where some have fallen short.

The couple surprised even themselves when they took the plunge and bought their first bar, The Brass Monkey at the hip end of Glasgow’s Argyle Street, three years ago.
Both had been content in established careers, Caroline as a teacher and Russell in the wine trade (he maintains the day job, as sales director with Hallgarten Druitt, while Caroline is now an employability advisor to Glasgow City Council). But, not only did the move pay off, with the bar now firmly established, it gave them the confidence to buy another.
The chance came about a year ago when the couple, who live in Kelvindale, became aware the lease for the former Fifty Five BC pub on Bearsden’s Drymen Road was on the market.
They were familiar with the town and felt that, although well served with good restaurants, it could accommodate a bar with a quality food offer. A call was duly placed with Belhaven and before long they had embarked on a process that would ultimately see them launch The Den shortly before Christmas.
As Russell told SLTN recently, the strategy for The Den has, in some ways, been to replicate what they have successfully achieved at Brass Monkey.
“It used to be very male-oriented – a place for guys going out for pints, which didn’t really interest us,” he explained.
“We wanted to do something similar to Brass Monkey so we’ve softened it up a little and tried to get younger people in with a similar drinks offer. And we wanted to do the same kind of thing with the food – not expensive but value for money.”
While the couple’s experience of launching The Brass Monkey served them well – not least on legal and operational issues – they have moved into some new territory with The Den.
Until then they had not offered food (see story left) or entered a lease deal with a pubco.
Russell admits he did have “reservations” about leasing, particularly over the beer tie, but he feels both parties have found a way to make it work.
Belhaven, he said, had been supportive of their interior plans and intention to make the venue less pub-oriented, and had also been flexible with the refurbishment costs.
“We came into it with our eyes open and knew what to expect,” he said. “But we did get a discount from Belhaven on the fixtures and fittings.
“They essentially paid for things like seating, which was good for our cash flow. Once we’ve paid that off we’ll get more of a [beer] discount. It’s made me happier about it.”
The interior changes made by the couple have been significant. Gone are the poseur tables and booth seating that used to occupy the area before the front windows in a move to help break up the space. Planning permission has also been granted for the installation of floor-to-ceiling windows at the front, which will be thrown open on sunny days.
Other noteworthy interior touches include the use of wine crates (from vineyards Russell deals with personally) as wall panels, giving the venue a cosy, wine cellar feel, and works by Glasgow artist Michael Murray (one painting of a Glasgow tenement has a different city landmarks in each window). Local architect Alan McClure, of Cunningham McLean, worked on the project.

ON drinks, the beer tie hasn’t prevented the couple from offering an eclectic range. Belhaven has supported their wish to lead the draught offer with the likes of St Mungo and Hefeweizen from Glasgow’s West brewery, Estrella Damm, Budvar and Addlestone’s.
Equally diverse is The Den’s range of wine and spirits.
Inverarity Morton is the bar’s chief source for spirits and soft drinks, though they also buy from Matthew Clark and WaverleyTBS.
“We basically try and use brands if we like the people,” he said. “Obviously the wine comes from Hallgarten – if I lose that account I have a bit of a problem!”
Russell said quality and value for money are the key drivers of their purchasing policy.
“I look upon it as value for us and value for our customers,” he said. “At the end of the day, I can buy cheap beer or cheap wine, but I’m only really kidding myself on.
“I might be able to make more percentage wise but if nobody’s going to buy it, it literally makes no difference. It’s detrimental, especially in the long term. We’re trying to build a business for the long term.
“We’ve stuck to that philosophy at The Brass Monkey and that’s been three years.
“We’ve seen people who have tried a cheaper offer in the area come and go.
“The ones that do well don’t have discount culture – they’ve a culture of good service and value for money.”
And it’s a culture Russell hopes the good folk of Bearsden will come to appreciate.
“We’re never going to stop people going into the west end or the town on a Friday or Saturday night,” he said.
“It sounds like a cliché, but we want to bring a little bit of the west end to them, with premium drinks and a nice environment.”

Image: Caroline and Russell in the ‘cellar’ at The Den, Bearsden. The bar is the couple’s second, having launched The Brass Monkey on Argyle Street three years ago.