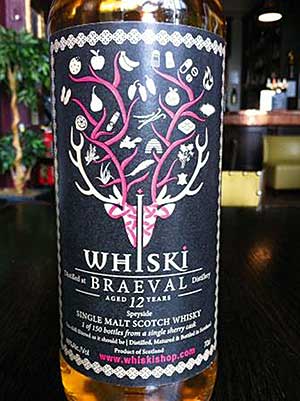 The 12 year old Braeval has been matured in a single sherry cask and bottled at 46% ABV. Only 150 bottles of the single malt will be released, at a price of £49.99 each.
“Bottling our own whisky is something we have always wanted to do and with our whisky shop staff incredibly keen to have something exclusively from us, we decided now was the right time,” said Whiski director Anne Still.
The whisky is being sold in the Whiski Shop, the specialist store next to its sister venue, Whiski Rooms, overlooking the Mound.
“We had great fun choosing and went through a lot of samples, scoring each one before selecting the Braeval as our first independent bottling,” said shop manager Gareth Van Rooyen.
The Whiski Group, which consists of Whiski, Whiski Rooms and the Whiski Shop, said it plans to release further independent bottlings in the future.