WAVERLEYTBS is well placed to play a leading role in any further consolidation of the UK wholesale sector, its new boss told SLTN last week.

The wholesaler has almost completed a major restructuring process overseen by turnaround specialist Manfield Partners since it acquired the firm from Heineken in 2010.
The restructure, which put the company back on an independent footing after years under corporate ownership (it was inherited by Heineken when it took over Scottish & Newcastle with Carlsberg in 2008) aimed to cut costs while improving efficiency and customer service.
The overhaul led the company to remove 138 staff from the roster, with the headcount now standing at 877.
And so far the signs are that the strategy is paying off.
In May, the firm reported that a 19% or £9 million reduction in overheads had been achieved last year compared to 2010, helping it to record a 5.5% rise in pre-tax profits to £4.2m in its first full year of trading since exiting Heineken.
Although revenues were down 11.6% to £309.4m, the business was said to have grown market share. In the last six months of the year “double digit growth” came in the free trade sector, with new contracts also secured with national operators like Hilton Hotels and Merlin Entertainment, the theme park operator.
New CEO Steve Benger, who joined the business 16 months ago and was until recently interim MD, said the restructure has put Waverley in a healthy position in the event of further consolidation in the sector.
“We’re never going to be complacent because it’s a very competitive environment, but we think we’re in a much stronger place now to be a major player in any consolidation of the sector that probably needs to happen, based on a still declining market and some over-capacity from a distribution perspective,” he told SLTN.
“We’ve created a platform that allows us to consider either horizontal or vertical integrations, so if we were to acquire another business we’d be able to create synergies and scale.
“We provide a complete proposition and we’re fairly confident there’s enough people out there looking to exit or be part of a consolidation play.
“You see where the customer is going as well – they’re looking more and more for a composite proposition. Getting fewer deliveries makes their jobs a lot easier, for small to medium sized customers and definitely the nationals.”
Benger expects more Waverley customers to order online in the months and years ahead.
At present 5% of Waverley customers currently do so, but he predicts that will rise to around 30% within 18 months of a new e-commerce platform being launched in September.
But he insisted the focus on electronic purchasing will not come at the expense of traditional ordering.
“You get people who are comfortable doing that [online], but we’re not walking away from the personal contact,” he said.
“We’ll be managing our contact strategy with customers to make sure they get the service they want.”
Benger said changes were also being made in response to a customer survey last year. He confirmed it is reversing a historic decision to move away from smaller accounts, and to make it easier for customers to order ‘top up’ deliveries.
“There were some comments we have taken on board about ease of doing business so we have put a number of things in place,” he said.
“And we will continue to make the customer journey easier. They are placing smaller orders more frequently and at this moment in time we don’t place a minimum order value on customers. We recognise that if we do it might be a disincentive [to order from Waverley].” 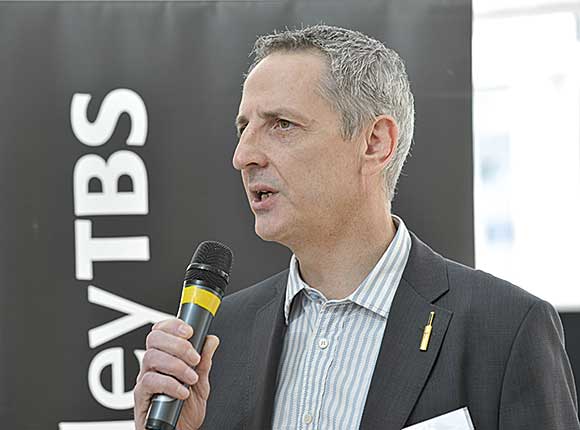