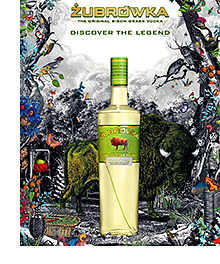 POLISH vodka brand Zubrowka is to star in its first ad campaign since its transfer to distributor First Drinks earlier this month.

The bison grass-infused vodka, which moved to First Drinks on July 2 after 13 years with Marblehead Brand Development, is being pitched at 25 to 40 year old consumers through the 18-month marketing campaign, which will include digital and social media activity as well as presence in the on and off-trades.
Visuals for the campaign are based on illustrations by artist Kristjana S Williams.
Hayley Aldous, senior brand manager for vodkas at First Drinks, said newly-appointed brand ambassador Pawel Rolka, who was born in Poland and has worked as a mixologist in London for the past ten years, will spearhead the on-trade activity. “Zubrowka’s unique taste transforms cocktails and mixed drinks – and now it is time for First Drinks to transform Zubrowka into the iconic brand its provenance deserves,” she said.

Image: The campaign is based on illustrations by Kristjana S Williams.