Robertson gets adult entertainment nod at sixth time of asking 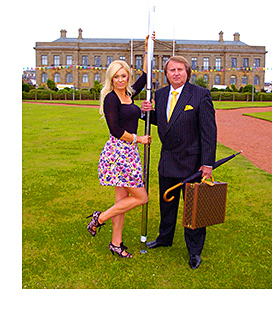 PERSISTENCE paid off for Forbes Robertson recently when he was finally granted the right to bring adult entertainment to the Ayr licensed trade.

Robertson had five applications to put on burlesque shows and pole dancing at his MillionAyr venue knocked back by South Ayrshire licensing board.
But the legal and political landscape had changed by the time he returned to the board for a sixth time last month.
A crucial case involving Brightcrew, which successfully appealed Glasgow licensing board’s decision to refuse it a licence for a Spearmint Rhino club in the city, is understood to have paved the way for the South Ayrshire board to grant.
Robertson’s successful application also came after the Scottish local elections in May and the appointment of a new licensing board in South Ayrshire.
The decision, which came after the operator applied for a major variation of his premises licence, means Robertson is entitled to stage pole dancing and burlesque shows “for specific corporate events that must be pre-booked”.
The colourful entrepreneur, who appeared before the board not with a lawyer but an exotic dancer, Monique Sands, said the stance taken by the new board was a “breath of fresh air”.
“Things have changed,” he said. “In the 1950s you could have been locked up if you were a homosexual, now we have civil partnerships – and in our premises,” he said.
“This will be the first [club like this] outside a major city but I said [to the board], ‘let’s not forget about Neil Armstrong. Someone has got to be first.”
Robertson, who holds a Guinness world record for the number of whiskies held in MillionAyr, intends to submit plans to the local authorities to convert a staff room into a kitchen. He ultimately hopes to run corporate nights at the venue, combining food, drink and adult entertainment for groups of male and female consumers.
“I’m going to do corporate stuff only,” he said. “Hopefully I’ll get about 50 a year. Everything will be pre-booked and paid up front so I’ll know what’s going on. There were no police or other objections. I said to the board that if it didn’t work out I’d be the first to hold up my hands.”
Councillor Ann Galbraith, chair of South Ayrshire licensing board, said: “Following a comprehensive debate and discussion regarding the application for a variation of the premises licence for MillionAyr in Ayr, the new board members unanimously agreed to allow live burlesque and pole dancing to be added to the operating plan.
“This decision was entirely consistent with the current legislation and recent legal decisions taken elsewhere.
“As we do throughout South Ayrshire, licensing staff will continue to monitor the premises to ensure it complies with the requirements of its licence.”
In Brightcrew v Glasgow licensing board at the Court of Session, a sheriff effectively judged that a board’s power to regulate should be restricted to matters linked to the sale of alcohol.