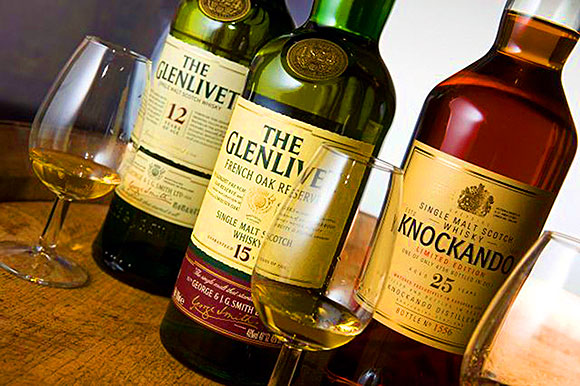 THE Glenlivet distillery had cause for celebration earlier this month when two of its malts picked up prizes at the annual Spirit of Speyside Whisky Awards.

The Glenlivet 12 year old picked up the award in the 12 years and under category, while the distillery’s 15 year old (French Oak) expression was judged best in the 13 to 20 year old category.
The 25 year old (2011 Special Reserve) expression of Diageo’s Knockando whisky was the other big winner at the festival, winning the category for malts over 20 years old.
The Spirit of Speyside Awards is open to all single malts from the region, provided they are proprietary bottlings and are “generally and commercially available”.

The awards allows us to showcase some of the finest malts in the world.

A total of 56 malts were entered this year, which were whittled down to six finalists through a blind taste-test process prior to the festival, which took place from May 3-7.
The winning whiskies were chosen by consumers and the awards were presented at The Macallan distillery on the opening night.
Alan Winchester, master distiller at The Glenlivet, said there is “no better accolade” than the vote of the consumer.
“That is why we value winning any award at the Speyside Festival so highly, voted for by festival goers from all over the world,” he said.
“For The Glenlivet to win two such awards this year is a bonus and a testament to the work by many of my colleagues over the last 12 and 15 years that it took to make those whiskies.
“I think [distillery founder] George Smith would have been proud!”
Festival chairman Jim Royan, who presented the awards, described this year’s event as “one of the most successful ever”.
“Thousands of whisky enthusiasts from around the world descended on Speyside to taste our whiskies, tour our distilleries and meet with other like-minded connoisseurs and experts of many different nationalities,” he said.
“It’s a unique festival and the whisky awards allow us to showcase some of the finest malt whiskies in the world to a very discerning audience.”