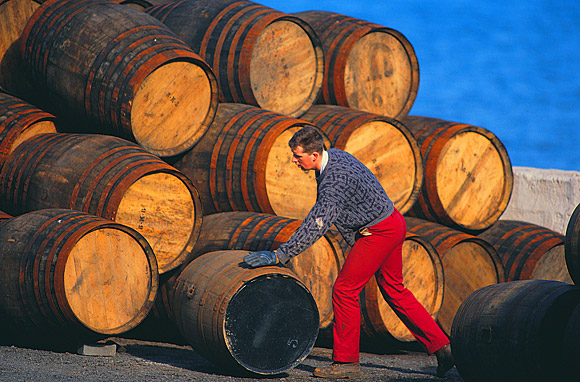 THE drinks industry is under intense scrutiny.

The government is weighing up how to legislate to improve citizens’ relationship with alcohol. Distillers are worried about how those moves will affect the industry’s ability to create jobs and remain competitive.
No, this isn’t a crude attempt to encapsulate the challenges facing the whisky industry today, but a brief resume of the circumstances taxing the minds of suppliers 100 years ago.
As the Scotch Whisky Association prepares to embark on its centenary celebrations this year, long-serving director Campbell Evans told SLTN that some of the industry body’s key priorities haven’t changed since its inception (originally as the Wine and Spirits Brand Association) in 1912.
“The reasons for our coming into being 100 years ago are very much the ones we’re still engaged in,” he said.
“There is a nice symmetry. In 2009, we had the Scotch whisky regulations passed, which set down how whisky is made and presented on a label. A hundred years ago it was the Royal Commission on what whisky is.
“Part of what we do at the moment is protect Scotch from misleading products. One of the reasons for forming the Wine and Spirits Brand Association in 1912 was protecting the integrity of Scotch whisky; it was also about taxation and it was alcohol’s place in society.
“Those three things are still very important to the industry today.”
Likewise, exports have forever been a major concern of the organisation.
Today, 90% of Scotch made is bound for overseas markets, with that percentage only likely to rise as markets like India open up.
Trade tariffs imposed by other nations are one of the main barriers to export success in 2012, but in the association’s early years it was factors of another kind that blocked the road to growth outside the UK.
The First World War, which broke out just two years into its life, and restrictions subsequently placed on cereals, caused distilling to cease; the usual rules governing imports and exports also went out the window.
World War Two, a period which saw the group renamed the SWA in 1942, brought similar challenges, though Evans explained that when hostilities ceased “Churchill said the barley must become available to the industry to generate export earnings to help the balance of trade”.
Yet while many of the broad themes haven’t changed (nor indeed have the fundamentals of the way whisky is made), the ownership of distilleries and their reach around the world has.
A major trend of the last two to three decades, Evans said, has been the consolidation of whisky firms and the “internationalisation” of their ownership – change he said reflects how widely Scotch is sold and its value to investors.
That such major players as Diageo and Pernod Ricard are building and re-opening distilleries is, in his view, a sign that the future looks bright.

The reasons for our coming into being 100 years ago are very much the ones we’re still engaged in.

“What we have seen over the last five or six years is investment and growth and that doesn’t seem to be coming to an end on the basis of the comments we’ve seen from companies,” he said.
The future of the industry will also be pondered in the SWA’s forthcoming centenary celebrations. While an exhibition in the Scottish Parliament this autumn will give enthusiasts the chance to delve into the industry’s rich and colourful past (a brochure is also being produced to document the industry’s achievements down the generations, alongside a study into its economic impact), Evans said there will also be an opportunity to consider what the next 100 years might hold.
Lectures examining whisky’s links to literature (Scotland’s national poet Liz Lochhead will unveil her tribute to our national drink at a special event in June – 100 days before the centenary itself) and film are also being considered.
If the journey is half as exciting as the first 100 years, whisky lovers – this generation and next – are in for a helluva ride.