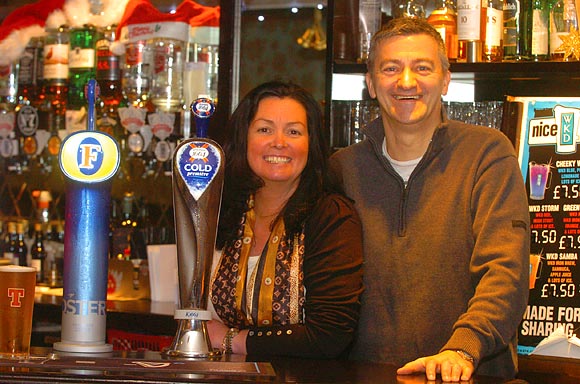 THERE have been “tears and tantrums” along the way, but Iain and Katie McLaren have no doubt their decision to enter the pub trade together was the right one.

The Kimberley Tavern has recorded double-digit growth and been highly commended in the SLTN community bar of the year award (in association with McEwan’s) since the couple took on the lease from S&NPC in October 2010.
For the McLarens, the financial success and plaudits vindicate their decision to take “a bit of a gamble” and switch careers during such uncertain economic conditions.
But then the trade wasn’t completely alien territory to them when they signed up.
Iain managed Glasgow city centre outlets like Chubby Chester’s in the early 1990s, before the arrival of their two sons saw him pursue a career on the other side of the bar, working for the likes of Diageo, Matthew Clark, Molson Coors and Diageo.
The couple always harboured a desire to run their own pub throughout that time, however – and identified the Kimberley Tavern, which celebrates its centenary in March, as the one they wanted some years ago.
“It [the trade] was always something we said we would go back to,” Iain said when SLTN visited recently.
“I had worked in pubs before and that was where Katie and I met, but then we got married and had kids and I didn’t want to be working every weekend.
“We knew the Kimberley because when we were first married we used to drink here occasionally.
“We always liked the pub and saw the potential.”

It’s very hard work but there are still rewards to be had from the pub trade.

Despite having a clear vision for the Kimberley, and how they would change it, the McLarens admit there were a few sleepless nights – not least because they were leaving their respective jobs to work together for the first time.
The fragile state of the economy didn’t do anything to allay any concerns they had.
“From the financial aspect, we were worried,” Katie recalled.
“We had our own separate jobs and we were giving that up to work together.
“It was a big lifestyle change.” 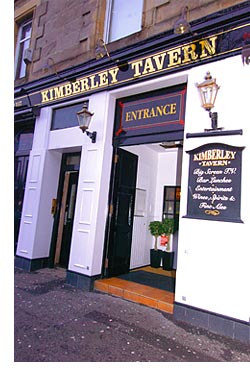 Armed with their vision of “bringing a bit of the city centre to the east end” and useful support from S&NPC, the McLarens took on the Kimberley Tavern on a five-year lease in October 2010.
A £40,000 refurbishment by the couple followed, which saw brown leather fixed seating paired with dark wood tables and chairs, and contemporary wallpaper and a stone-clad bar introduced.
The pubco, meanwhile, spruced up the exterior.
The revamp was carried out by local trades people in three stages over a six-week period with the pub trading throughout – a strategy that made sense from a customer retention and financial point of view.
But it’s not only in interior terms that the Kimberley is designed to offer a flavour of the city centre – its drinks range has a similar aim.
Draught beer, which the McLarens are tied to buy from Heineken, S&NPC’s parent company, includes premium brands like Kronenbourg 1664, while the couple ‘shop around’ different suppliers for spirits and wine. The offer includes wine by the bottle as well as Prosecco and Champagne, and there are plans to launch a cocktails and cupcakes promotion in February.
The McLarens have also introduced live entertainment (tribute act Them Beatles recently had the place packed out); and immersed themselves and the bar in the local community, holding numerous events for charity and working with local schools and organisations.
Katie said the changes at the Kimberley have been well-received.
“We’re really pleased with it,” she told SLTN. “A lot of customers have told us it’s like a bar in the city centre and that’s what we wanted to bring to the east end.”
With the Kimberley now firmly established in local affections, the McLarens haven’t ruled out taking on another pub in future.
In fact, they think they work rather well together.
“Iain has that knowledge of the trade and that’s definitely helped,” said Katie.
“That’s why we knew we would go back to it [the trade] because we knew what we each brought to the table.
“If I had done it myself there’s no way I could have without the S&NPC support.”
Iain agrees that the couple’s combined skills, in addition to the backing from the pubco, have been key to the Kimberley’s success.
“I think the support and systems S&NPC have in place were very helpful,” he added.

We wanted to bring a little bit of the city centre to the east end.

“And there are things we’re both good at so it works well.
“Katie does a lot of the front of house and I handle more of the accounts and paperwork side.
“Katie is great at going out into the community and engaging with people. I can press buttons on a calculator but if we don’t get people in the door that doesn’t matter.
“You can’t just sit back and open the doors and expect people to come in.
“If you’re willing to invest financially and in terms of time, training, entertainment, involvement in the community, then you get the rewards.
“It was a gamble for us, there were tears and tantrums along the way and it’s bloody hard work, but there are definitely still rewards to get out of the pub trade.” 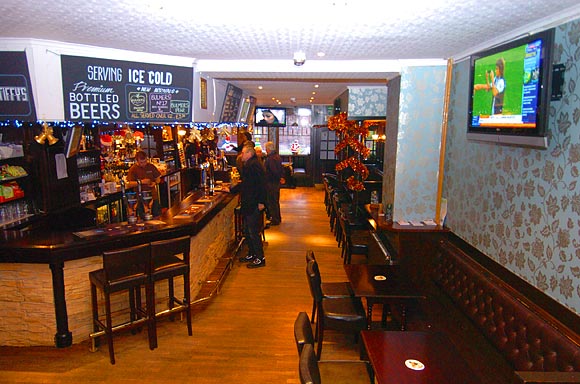