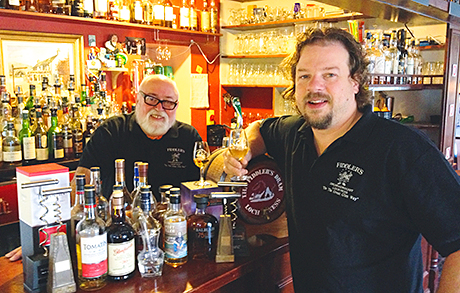 THE team behind the reigning SLTN Whisky Bar of the Year will take their knowledge of rare malts further afield next month with a special tasting event in Monaco.

Jon Beach, owner of Fiddler’s in Drumnadrochit, and his father Dick have been invited to the principality by La Maison D’ Ecosse, a company which imports luxury Scottish goods to Monaco.
Among the malts the father and son team plan to take with them are a 1975 Balblair, a 30 year old Tomatin and a 40 year old Glenfarclas, a Dalmore King Alexander III, all of which have been donated by the respective distilleries for the event.
“It’s quite exciting,” Jon told SLTN. “We’re just a wee bar here and we’ll be doing a tasting in Monte Carlo.
“What we’ll be talking about is all about drinking it and sharing it. We’re not going to be talking about hoarding it in cellars.”

Image – Jon and Dick will take a number of malts to the event in Monaco.