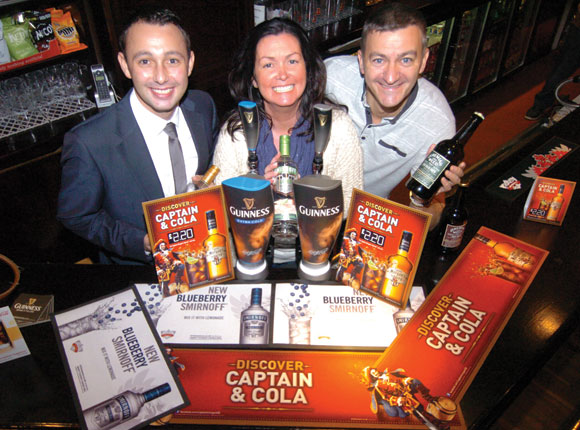 IT’S often the simple things that are the most effective.

In his role as one of Diageo’s 13 business development executives in Scotland, it’s Gary Marshall’s job to ensure customers have all the tools they need to maximise sales of the company’s brands – and boost their revenues in turn.
The advice and support he and his colleagues provide is numerous and varied, but in many cases it’s the essential tools of the sales trade licensees are calling for, whether it be branded glassware or high impact point of sale materials.
That much was evident when SLTN accompanied Gary on his calls in the Glasgow area one day last month.
His first visit was to the Wee Mill in Rutherglen, an attractive community-based pub leased by Debbie Owens from the Iona Pub Partnership.
Gary’s relationship with Debbie goes back to the day the pub relaunched with a new look three years ago, when as a Guinness quality rep he faced a race against time to ensure the ‘black stuff’ was flowing by the time the pub opened.
Debbie, who has run the pub for the past four and half years (initially leasing from Punch Taverns and then Admiral Taverns), said operators are having to work harder than ever to attract customers.
As such she has developed a busy entertainment programme, including poker nights, quizzes and karaoke to drive footfall across the week.
Then, once people have come through the door, Debbie feels one of her biggest assets is the communication tools companies like Diageo supply, be it posters highlighting drinks serves or branded staff T-shirts. Not only does it provide some theatre in the outlet, she said, it lets the consumers know what’s on offer.
“You generally get less support from brands these days, but these kind of things are very helpful,” she said.
“Things like branded shirts for our sports team are great.
“It raises awareness of the brands we have.”
During the call, Gary took the opportunity to talk to Debbie about some new additions to the Diageo portfolio that she might consider taking on board.
These include the Smirnoff flavours range, most recently augmented with vanilla, the fourth in the collection, and Jeremiah Weed, a new long beverage available in root beer and sour mash flavours.
Served in a branded ‘jam jar’ with ice, the drink has an ABV of 4% and is expected to compete with flavoured ciders and other long alcoholic beverages, though Diageo feels it’s in a category of its own.

People said we couldn’t sell Prosecco with raspberries, but it’s taken off.

“Jeremiah Weed is a ‘discovery brand,” Gary explained. “We’re looking for the brand to grow by word of mouth.
“Innovation is paramount to what we do. As the customers’ main point of contact from Diageo, I must ensure I communicate what we do effectively to them.
“Our on-trade customers are looking for new ways to diversify their offering and more often than not they’re looking to know more about our new innovation brands.”
The visit to the Wee Mill saw Gary depart with a small list of chores to perform for Debbie – which also translated as opportunities for Diageo.
As well as providing fresh POS kit (Guinness half-pint glasses and drip mats, ice buckets and a Baileys optic) he will supply the bar with posters highlighting serves like Captain Morgan’s Spiced and cola.
Gary said the opportunity of ‘finished drinks’ is currently a major priority for Diageo.
“We are continuing our focus on finished drinks and giving consumers great value with consistently well-served drinks,” he said.
“Customers can make a good guess about the price of a pint of lager – they’re less sure about a spirit and mixer.”
From the Wee Mill, we travelled into the city’s east end to The Kimberley Tavern in Tollcross – highly-commended in the Community Bar category in the recent SLTN Awards.
Owners Iain and Katie McLaren have worked wonders at the pub in the 14 short months they have been at the helm, and in the three weeks prior to the visit had recorded their busiest spell in that time.
Among the many changes they have made to the outlet (named originally after tobacco clipper The Kimberley Queen) has been to revolutionise the drinks offer. Along with live music – it has just enjoyed a bumper evening with a performance by leading tribute act Them Beatles – it’s just one of the main reasons it’s beginning to attract people from outside its native east end.
“We’re considering introducing a Mojito night on a Friday and also planning a cocktail and cupcake night,” Iain said.
“We also serve Prosecco with raspberries soaked in liqueur.
“When we took over people said we couldn’t sell things like that, but it’s just taken off.”
With the Kimberley’s clientele open to trying new and innovative products, Gary feels there’s an opportunity to capitalise on the drinks list even further. “I’d like to work with Iain and Katie on Smirnoff flavours and see which drinks will work,” he said. “I’m also keen to help them develop a cocktail menu.”
With that, the ‘drinks doctor’ Gary was off with his case notes from the Wee Mill and The Kimberley, looking for the formula that will help them build their businesses – and Diageo’s in the process.