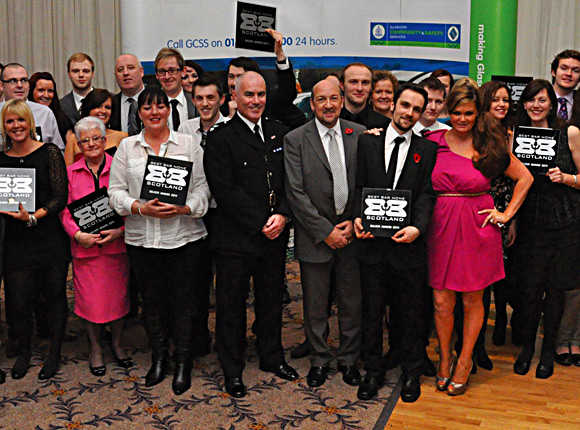 GLASGOW bar and nightclub operators have been recognised for running safe and responsible venues in the city’s annual Best Bar None Awards.

More than 80 outlets received gold, silver and bronze awards last week in what was the seventh year of the scheme.
Clyde 1 DJ Suzie McGuire hosted this year’s awards ceremony at the city’s Thistle Hotel, which saw the presentation of 22 gold, 41 silver and 16 bronze gongs.
Overall gold awards also went to the best venue in each category: Montford House in Kings Park was named overall winner in the ‘standard hours’ category, The Arches took the top award for late night venues, and the Gala Riverboat Casino was overall winner in the specialist entertainment section.
It was the second victory this month for The Arches, having won the SLTN award for Late Night Venue of the Year on November 3.
Five specialist awards were also presented at this year’s BBN ceremony.
Gavin McGreish of Campus was named most outstanding premises manager for the second year running; Bath Street bar Slouch was named best newcomer; Bar Home took the award for most improved venue; the Gala Riverboat Casino won the night radio network achievement award; and O’Neills in Sauchiehall Street took the award for fire safety.
Sponsored by Diageo and led by Glasgow Community & Safety Services (GCSS) in partnership with Strathclyde Police, the Scottish Late Night Operators’ Association, the SLTA and the Glasgow Alcohol and Drug Partnership, BBN recognises venues which prioritise public safety and customer care.
Entrants were inspected by licensing teams at Strathclyde Police, who judged them on a range of criteria, including prevention of crime and disorder, securing public safety, prevention of public nuisance, promotion of public health and protection of children from harm.
Councillor Alex Glass, chair of GCSS, said: “These awards celebrate the success of our night time economy and those involved in making it a pleasant experience for people in pubs and clubs throughout the city.”
Chief Superintendent Bernie Higgins praised operators for their efforts to promote the safety of their customers.
”Glasgow’s licensed trade is an important partner in helping to achieve our aim of making Glasgow an even greater city to live, work and socialise in,” he said. “The Best Bar None scheme and the winners of the awards all demonstrate the commitment by all of us to achieve this.”