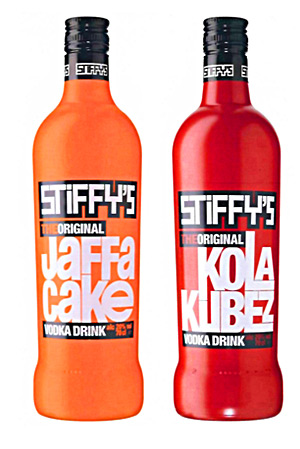 STIRLING-based VC2 Brands has hit back at the Portman Group after the watchdog’s complaints panel forced it to rename its flagship product – despite giving it a clean bill of health for several years.

VC2 has rebranded its Stiffy’s vodka liqueur as Stivy’s after the panel ruled that the product’s name was in breach of Portman’s code of practice on the naming, packaging and promotion of alcoholic drinks.
It said the brand name was “inappropriately linked” to sexual success after receiving a complaint from Molson Coors, the brewer of Carling lager.
However, the panel did not uphold two other elements of the complaint: that the brand’s cola and jaffa cake flavours and its bright packaging appealed to people under 18, and that the product name could be seen as an attempt to glamorise the strength of the drink.
VC2 co-founder Graham Coull hit back at the judgement, describing the perceived link with sexual success as “ridiculous” and criticising the watchdog for being inconsistent in the advice it gives to drinks companies.
Coull told SLTN that the Portman Group had six opportunities a year to advise if it had any concerns about the brand’s name, labelling or marketing but decided not to.
“I understand why they might want to look again at something if a complaint came in, but just three weeks beforehand they had approved a new label – a completely new label with Stiffy’s on it,” he said.
“Then they came back and said they were no longer approving the label and that we had to change the name.
“I don’t have an issue with the Portman Group, but there needs to be consistency in their advice. The danger in what they’ve done is that no brand out there can put a value to their name on the balance sheet, because it can be banned by the Portman Group.
“What Portman is being is reactive – not proactive.”
A spokeswoman for the Portman Group defended its position, stating that it is an advisory body that does not give approval to products and marketing and that it is completely separate to the independent complaints panel.
Asked why the group had only now decided the name was no longer acceptable – it had been called Stiffy’s since its launch in 2002 – she said the panel felt it was worth a fresh look as “we live in a changing climate” as regards alcohol.
The Portman Group is currently consulting on a review of its code of practice, which is now in its fourth edition; it was first launched in 1996.
Molson Coors declined to comment on its complaint.