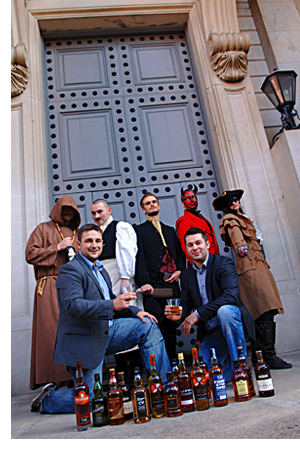 A NEW whisky show launched in Edinburgh last week, pledging a fresh spin on the “stuffy” events traditionally held by the trade.

Organisers Scott Martin and Darroch Ramsay have promised Whisky Stramash, which will take place at Surgeons’ Hall on May 26 and 27 next year, will offer two days ‘full of mystery, entertainment, comicality and madcap pioneering’.
Distillers, companies and brands such as Dewar’s, Jura, Bunnahabhain, Finnieston, Isle of Mull and Arran single malt have signed up to exhibit at the event, which will feature molecular experiments, a murder mystery drama, whisky cocktails and an insight into the ‘gruesome lives of barber surgeons’.
Martin said the event would be an antidote to the “predictable” and “old fashioned” events he and Ramsay encountered while working in Scotch exports. “We wanted to stage an event that has a distinct point of difference by presenting the spirit in new, different and innovative ways, whilst giving consumers the opportunity to try a wide range of whiskies from around the world; a modern take on traditional fun,” he said.