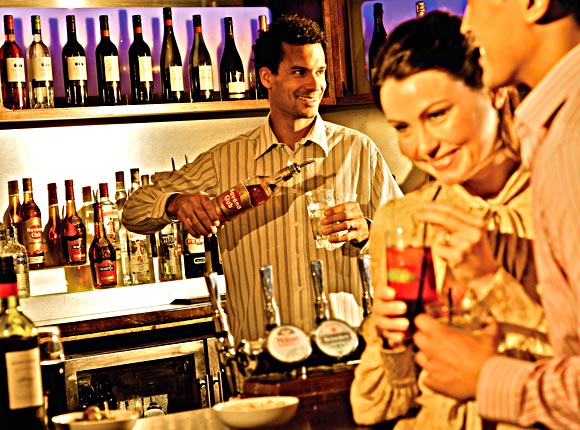 A MYTHICAL sea creature, a pink pigeon and a high-ranking naval officer – there’s been no shortage of attempts to inject some personality into the spiced rum sector recently.

Black spiced rum The Kraken, which takes its name from the fictional sea monster, and Pink Pigeon, named after an endangered bird native to its homeland of Mauritius, have joined Diageo’s recently-rebranded Captain Morgan’s Spiced and Sailor Jerry in a category that’s seen no shortage of activity this year.
Other developments have seen Belfast-based drinks wholesaler Botl bring Trinidad’s 19 Spiced vanilla rum to the Scottish trade and, more recently, Bacardi pitch for a slice of the spiced market with last month’s launch of Bacardi Oakheart.

Spiced rum is a great entry point for consumers moving into the rum category.

And there’s a very good reason the golden rum sector – and spiced sub-category – has been the focus of so much activity.
Figures from CGA Strategy suggest the value of rum sold in the UK on-trade reached £423 million in the year to March 19, up 8% on the previous year. Driving the growth was golden rum, which was said to have seen a 24% uplift in the value of sales and a 19% rise in volume sold in the UK on-trade in the year to March 19.
In Scotland, total rum sales in pubs and clubs reached £84.6 million in the year to May 14, up from £76.2m the previous year.
In light of such encouraging statistics, it would seem to make sense for operators to have plenty of golden and spiced rums on the gantry.
But with so many brands to choose from, how do owners know what to stock and how to serve them?
Tom Wade, senior brand manager for Sailor Jerry at distributor First Drinks, told SLTN offering a choice of styles – and serves – is key.
“Obviously it’s very exciting that there are a lot of new brands; we welcome that,” he said.
“Our hope is that they offer new niches and flavours rather than ‘me toos’.
“It should be about real innovation and I think the trade wants that too.
“Most of the brands within golden – and spiced – rum are quite different propositions. It’s good to give consumers the choice.
“And bartenders are being more creative with serves. With cola is still the largest volume and ginger beer is doing well, but bartenders are also coming up with different serves that appeal to their customers.”
That golden and spiced rum are inherently versatile is a big factor behind the category’s growth.
Dave Stewar of Marblehead, distributor of The Kraken, said the firm promoted several combinations at this year’s T in the Park festival, as well as signature serves The Perfect Storm (The Kraken with ginger beer and a squeeze of lime) and Krakola (The Kraken and cola),
These included Berry of the Beast (The Kraken with raspberry puree, fresh lime juice, sugar syrup and soda) and A Kraken Sunset (The Kraken, fresh lime juice, Orgeat syrup, pomegranate grenadine and pineapple juice).
“Spiced rum is something people find accessible because of its taste and because it’s mixable,” Steward told SLTN. “The Kraken is very versatile – it’s in high-end mixology bars in complicated cocktails and it’s equally good in simple serves.”
Fellow new kid on the spiced rum block Pink Pigeon is pursuing a similar strategy.
“Simple serves in the spiced rum category have attracted new drinkers to golden rum,” said marketing director Simon Green at Inspirit Brands.
“We have found with Pink Pigeon that simple serves allow spiced rums to be easily accessible in all levels of outlet, ranging from premium cocktail bars to high street outlets.
“The Mojito is still the most popular cocktail in all categories.

Operators should put their money where the growth is – and that’s golden rum.

“The Pink Mojito, Pink Pigeon’s signature serve, allows us to access this market but still have a point of difference from other brands.
“The simple serve element also plays a large part – we recommend drinking a Pink Pigeon with cranberry and a squeeze of lime over ice.”
Sue Beck, marketing controller for Lamb’s Navy Rum, said cocktails have played a part alongside simple serves as sales of golden rum have soared in bars.
“Golden and spiced rum is still key for the on-trade with the category continually growing ahead of any other spirits category,” she said.
“Much of this is driven by simple serves, such as cola and ginger beer, but many consumers are now venturing into the world of rum via spiced and golden rum in cocktails.”
Nick Yates at Pernod Ricard, whose portfolio includes Havana Club, offered a similar view.
“With consumers increasingly willing to invest in premium spirits, there is a real opportunity for licensees to offer simple drink solutions, such as the Dark and Stormy and the Cuba Libre, that use high quality premium rum brands,” he said.
“For more cocktail-led venues, outlets should cater for more complex serves containing premium ingredients, such as the genuine Cuba Libre and Daiquiri.”
Bacardi is also highly active in the rum cocktail market.
As well as continuing to promote Bacardi Superior white rum as the essential Mojito base, it’s highlighting a number of serves and cocktails for its new Oakheart spiced variant.
The firm’s Alex Turner expects there will be more launches to come in the fast-growing golden rum category.
“Spiced rum is a good entry point for consumers coming in to the rum category,” he said.
“There’s still a huge amount of growth to come for spiced rum and I think we’ll see a lot more players coming onto the market in the next two or three years.”
That prediction was echoed by Violeta Andreeva, brand manager of Captain Morgan’s Spiced at Diageo.
Suggesting that golden rum accounts for 54% of the total rum market in Scotland, compared to 25% in England and Wales, Andreeva said operators who promote golden and spiced rum in their outlets stand to reap the rewards.
“Operators should definitely put their money where the growth is – and that’s golden rum,” she told SLTN.
“Golden rum has experienced such growth over the last year or so because it attracts younger consumers due to its sweeter taste than other rums.
“Licensees should focus on introducing their customers to rum by making sure the leading brands are well-displayed; promoting the finished drink, like Captain Morgan’s Spiced with cola or ginger ale; and advertising the price of the finished drink.”