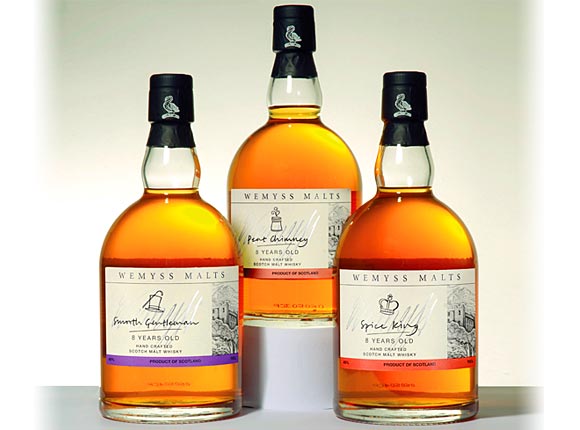 DISTILLERS around Scotland have been celebrating after seizing an impressive haul of awards in two highly-respected spirits contests.

Glenfiddich’s sister brands also did well across both competitions, with blended Scotch Grant’s taking two gold medals at the ISC for its Ale Cask and 12 year old expressions, and a gold at the IWSC for Grant’s 25 year old.
The Balvenie, which is also part of the Wm Grant stable, and marketed by its distribution arm First Drinks, was awarded the IWSC trophy for single malt whisky 15 years old and over for its 30 year old expression, as well as a gold best in class award.
Further gold IWSC awards went to The Balvenie’s Portwood 21 year old, Peated Cask 17 year old, Forty and Signature variants, while The Balvenie Portwood and Signature took gold awards in this year’s ISC.
Also celebrating wins in the ISC was Wemyss Malts, which took three silver medals for three of its eight year old blended malts: Peat Chimney, Spice King and Smooth Gentleman.
“We are delighted to have won the International Spirits Challenge awards,” said MD William Wemyss.
“These awards quickly follow a clutch of silver awards for this range in the 2011 International Wine and Spirit Competition.”
Meanwhile, the newest member of The Famous Grouse family picked up a gold award at the ISC.
The Naked Grouse, which contains The Macallan and Highland Park malts matured in first-fill sweet sherry casks and was launched in the UK in June, was described as having “good depth and maturity” with a “long sherried finish” by judges.

The growth in this year’s entry numbers has been impressive. Whisky entries alone went up by 21%.

And, in the IWSC, Inver House Distillers’ Balblair 1978 picked up a gold award. “I am delighted by the critical acclaim we regularly receive for our whiskies,” said Balblair brand manager Andy Hannah.
IWSC marketing manager David Kelly said this year’s competition saw an increase in submissions across all categories.
“The growth in this year’s entry numbers and the international breadth of products has been impressive,” he said. “Whisky entries this year went up by an incredible 21%.”

Turn over a new leaf this autumn

A very different year for cocktails