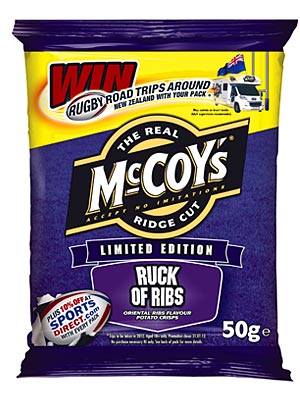 MCCOY’S has its sights set on rugby fans this autumn with the launch of a new promotion.

The Rugby Road Trips promotion gives consumers the chance to win a rugby holiday in New Zealand for them and their friends, as well as discounts off the price of sporting goods.
Four trips to New Zealand, which next month will host the Rugby World Cup, will be given away through the on-pack promotion, with a further trip up for grabs through the brand’s Facebook page.
Each pack will also contain a voucher giving consumers a 10% discount off their next purchase at Sports Direct.
The promotion comes as McCoy’s introduces two limited-edition flavours to its range, both with a rugby theme.
Pickled Scrumion and Ruck of Rubs were both launched in August in 50g handy packs, RRP 66p.
George Johnston, bagged snacks marketing director at United Biscuits UK, said autumn provides a significant opportunity to boost crisps sales, as rugby fans come together to watch matches in the pub.
“During last year’s [football] World Cup, McCoy’s sales were up 23%, helped by two limited edition flavours, demonstrating that strong, limited edition flavours and a very desirable sporting-themed prize always go down well with McCoy’s loyal fans and these two flavours have proved very popular in research,” he said.
UBUK said the McCoy’s brand is worth £98m in the UK.
As well as McCoy’s, United Biscuits is the company behind the Hula Hoops, Skips, Phileas Fogg and KP Nuts brands in the UK.