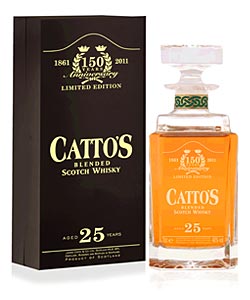 A LIMITED edition whisky has been launched to mark the anniversary of what’s claimed to be one of Scotland’s oldest blends.

Just 2400 bottles of Catto’s 25 year old have been released in export markets to mark the brand’s 150th birthday.
The 25 year old blend is bottled in a Lochinvar crystal decanter and comes in a specially-designed black box with gold lettering.
Lynne Buckley, Catto’s brand manager at Inver House Distillers, owned by International Beverage Holdings, said the bottling has been launched in recognition of founder James Catto, who established his business in Aberdeen in 1861, blending local Highland malt whiskies he sold in his grocery store with Lowland grain whiskies.
“James Catto was an innovative Scot, creating a blend that has stood the test of time and is still as popular today as it was then,” she said.
“We’re delighted to be able to celebrate the 150th anniversary of his blended whisky and hope that his legacy continues on for a long time to come.”