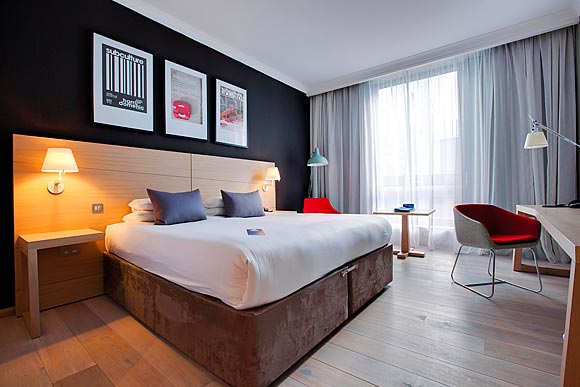 THE firm behind Glasgow’s Radisson Blu hotel has introduced two distinct styles of bedroom following its recent refurbishment.
All 250 rooms and suites in the Argyle Street hotel, which is operated by the Rezidor Group, have been given a fresh new look with new decor, furniture and furnishings.
Two styles of room have been rolled out to cater for guests’ differing tastes.
Some 154 rooms have been designed in the City Club format, which is described as “light and airy, cosmopolitan” spaces with wooden floors and accents of red in the furniture.
The 50 Gallery rooms, conversely, are said to provide a “darker, moodier ambience”, with carpeted floors, darker decor and Brian Sweeny monochrome images of music artists together with vintage posters from Glasgow’s Sub Club.
The remaining 46 bedrooms have been refreshed in a contemporary style.
Radisson Blu has also extended its existing facilities for guests, which include free high-speed internet access and complimentary gym, with in-room features, such as iPod docking stations.
“We are delighted to unveil our new look guest rooms,” said Graeme Gibson, general manager of Radisson Blu Glasgow.
“The refurbishment work is a true makeover – completely refreshing the rooms.
“From new wall colourings to new flooring, beds, chairs and all soft furnishings, this is a real transformation.”
The hotel includes the Collage bar and restaurant, the Atrium bar, and a series of meetings and events rooms, including a function room which can accommodate 800 guests theatre-style.

(Image:Rooms at Glasgow’s Radisson Blu have been refurbished in two styles: City Club (above) and Gallery.)