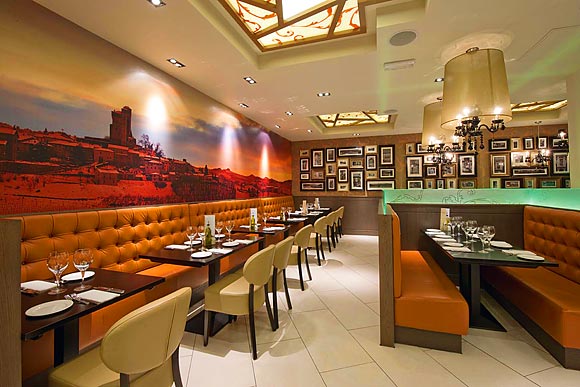 IT seems hardly a week has passed in recent months without the recession claiming another business. Pub and club group Castle Inns and deli chain Peckham & Rye were among the latest trade operations to hit problems when they called in the administrators last month.
But one hospitality firm is not just holding its own in the current climate, but investing to grow its business.
The Di Maggio’s group has invested £1.2 million in redeveloping a Glasgow city centre restaurant and launching a new venue at a prime Edinburgh address.
The business, which opened its first restaurant, Di Maggio’s in Glasgow’s west end, in 1985, has relaunched L’Ariosto in the city’s Mitchell Street as The Barolo Grill, an Italian steakhouse.
With a ‘contemporary’ interior design and wood-burning pizza oven, the new-look restaurant has 140 covers, as well as a private dining space for 50.
Di Maggio’s group director Mario Gizzi, who runs the business with cousin Tony Conetta, said the time was right to try something new at the site, which had traded as L’Ariosto for 40 years.
“We felt the concept had run its course and, with an Italian steakhouse where you can also get pizza and pasta, we think we’ve found the way forward,” he told SLTN. “We’ve transformed it from a celebration, two days a week business to something that’s busy seven days a week. It’s quickly established itself as one of the main venues for suits in Glasgow – it’s quality, upmarket, the service is quick and because it has so many booths people feel they can have a private conversation.”
In Edinburgh, Di Maggio’s has invested an even higher sum – £750,000 – developing a second restaurant under its Amarone brand (the first is in Glasgow’s Nelson Mandela Place). The 8000 sq ft venue, which opened at the end of June, has 150 covers and is described as a ‘Milanese-style’ pizzeria and wine bar.
Gizzi said the venue, which has launched in time for the Edinburgh Festival and Fringe, is well-placed to attract tourists as well as capital locals.
“We’re right on the corner of George Street and St Andrew Square, diagonally opposite Harvey Nichols, so it’s a fantastic location,” he said.
The projects come after the operator’s property arm agreed a £15 million funding package with the Clydesdale Bank.
The deal was struck under the bank’s Investing for Growth strategy, and underpins Di Maggio’s plans to grow its property portfolio: moves into Aberdeen and cities down south are on the radar.
Gizzi said the firm had switched to the Clydesdale Bank after judging it a “better fit in the current climate”.

We believe in both products and feel we have brought something new to the market.

The firm which employs 500 staff and turned £18.8m in its last financial year, currently operates 16 outlets, including venues under the Di Maggio’s, Cafe Andaluz and Amarone brands.
According to Gizzi, landlords and vendors were willing to accept “more realistic values” for properties than before the downturn. “We still have a strong appetite for growth despite the challenging financial climate and we’re on schedule to open a US-style chop house in St Vincent Place in Glasgow by mid-2012.”
Nigel Kerr, business development partner at the Clydesdale Bank, said: “Di Maggio’s is one of Scotland’s most respected restaurant operators and we’re delighted to be able to support the group as it prepares to embark on the latest phase of its expansion. Despite the challenges facing the sector, Di Maggio’s continues to trade strongly due to the strength of its property portfolio, the quality of its cuisine and the high standards of customer service it delivers.”

(Image: Like Amarone, the Barolo Grill (above) takes its name from wine, this time the wine producing area of northern Italy.)