The DRG’s latest outlet harks back to building’s printing past. Jack Walsh reports

IN 1842, one of Glasgow’s very first newspapers – The Glasgow Citizen – was launched.

Founded by James Hedderwick, the city-based title went from strength to strength – so much so that, in 1864, an evening edition of the newspaper, The Evening Citizen, was introduced.

Come 1889, the business moved to a new purpose-built, red sandstone building on St Vincent Place, where it would remain until its final edition rolled off the press on Friday March 29, 1974.

And it is this history that has proved to be the source of inspiration for The Di Maggio’s Restaurant Group’s (DRG) latest bar and restaurant, The Citizen, which opened earlier this month in the restored A1 listed building that once housed the now defunct titles.

The group’s 19th outlet in Scotland, The Citizen sits shoulder to shoulder with sister outlets The Anchor Line and Atlantic on St Vincent Place.

Keen to stay true to the building’s newspaper roots, the DRG issued a public call-out for information regarding the Citizen titles, and was inundated with various stories and photographs from those keen to share their tales, shedding light on the building’s past.

“The Evening Citizen was very much a Glasgow paper and this is very much a restaurant for the citizens of Glasgow,” explained DRG director, Tony Conetta.

But to bring the eatery into line with this vision, a substantial six-month refurbishment had to be undertaken.

The building, which was most recently home to The Trading House, became available to lease after Trading House owner the New World Trading Company was sold to an equity firm last year.

And Tony said that because The Citizen “is a completely different concept” to the previous incumbent, the premises had to be completely redesigned.

“We definitely had some clear ideas of what we wanted to achieve,” he said.

“There was a definite strong brief that we worked together to make it work.”

And it is evident throughout the 218-seat bar and restaurant.

Rich teals, vibrant fuchsias and dark wood all feature, combined with a bright mosaic floor and touches of gold and copper to create an opulent drinking and dining space.

The Evening Citizen was a Glasgow paper; this is a restaurant for the citizens of Glasgow.

There are also plenty of pieces designed to pay homage to the building’s printing past – from the specially-designed glass panes featuring The Citizen logo, which is based on the newspapers’ original masthead, to the framed pages of both The Glasgow Citizen and The Evening Citizen.

The group commissioned Scottish artist and designer Ranald MacColl to create a series of original paintings – The Editor, The Reporter, and The Photographer – all three of which are positioned throughout the restaurant (with another two to follow). The building’s newspaper background has also been incorporated in the venue’s private function room, which is named The Editor’s Suite.

But while the venue pays homage to the past and features many classic design elements, there’s plenty of nods to the present. For instance, the group commissioned street artist Will Betham to create five original portraits – designed to add a contemporary touch to the design.

“The art we had in mind for a long time; it was such a large space, we wanted to have the people on the wall looking down on you and we had spotted the art a long time ago and thought it would be perfect for this space,” explained Tony, adding that while the venue “has quite a classic design, there’s quite a contemporary feeling in the artwork”.

A total of 72 portraits capturing the people of Glasgow also have pride of place in the restaurant. Taken by Charles Hamilton of Glasgow Street Photography, artwork manufacturing firm Scotia Visuals was tasked with taking the portraits from digital images through to ready-to-hang artwork, as well as ensuring each was off-set, as per DRG’s request, in order to give the display a three dimensional look (see main picture right); it also completed the printing of the other fine art prints in the restaurant.

The mix of past and present is also evident in the food and drinks range at The Citizen.

The bar is said to be the first in the country to stock Tennent’s Tank Lager  – served fresh from large copper tanks behind the bar – since the 1980s.

“It was something we [always] wanted to do,” Tony explained.

“It’s a huge investment, you can’t get Tennent’s Tank Beer at the last minute – Tennent’s have not done this since the ’80s. To mobilise a company of that size to start producing that and to get them excited about it took a lot of work.

“67% of all beer [sold] in Glasgow is Tennent’s and that is the very best way of serving it; it’s unpastuerised, so it’s not boiled, so all the subtleties of the flavours that the brewer wants it to have are in the lager.” 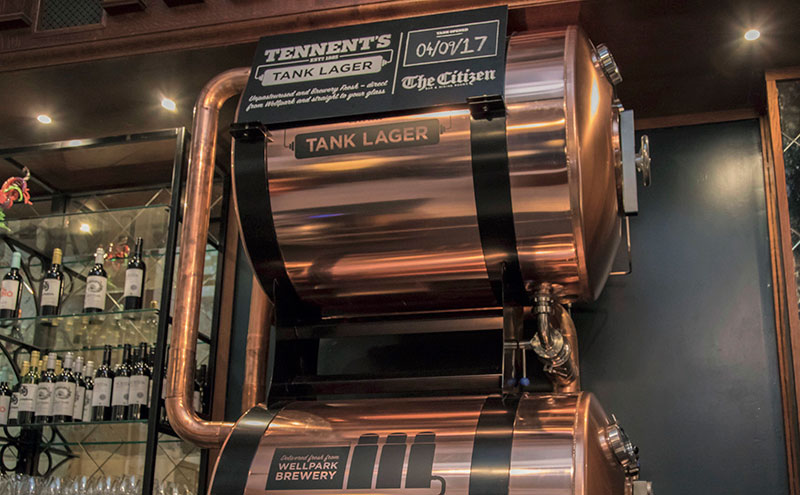 There’s plenty of choice beyond Tennent’s at The Citizen.

While all drinks categories are represented on its expansive gantry, Tony said there is a specific focus on cocktails, stating that they are “in a rich seam at the moment of people that are [looking] to become mixologists”.

“There’s people butting elbows behind the bar to be the best mixologist we have; it’s a really in vogue profession at the moment,” he said.

The Citizen is also well-equipped to tap into the growing demand for premium products, particularly in its Editor’s Suite.

The private room, designed to be used for all manner of events – from afternoon teas to private evening parties, features 28 personal drinks cabinets. With some available to drinks firms and others to customers, those that buy a cabinet can store their favourite drink inside and are guaranteed a seat in the suite.

On the food front, working with Rodgers Butchers for meats and Bernard Corrigan for fish, The Citizen serves what Tony described as “comfort food at its finest”, with the menu set to develop in time.

“We don’t want to put a menu on the table [that] we can’t produce, can’t get out in a timely fashion,” he said.

“We buy the very best products, and we develop how we produce them – so it’s not a static business, it’s in development.”

While The Citizen celebrates the history of the building – and Glasgow, it also focuses on the present, as well as looking to the future.

Tony said: “We’re hoping to be very up to date; our music is up to date, our artwork is up to date, we’ve brought something brand new with Tennent’s Lager – we’re really trying to capture the moment.”