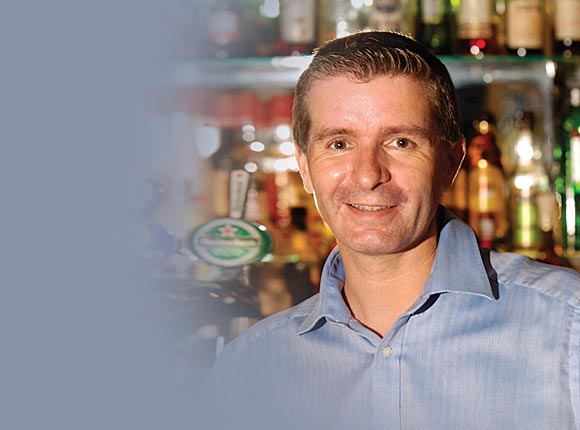 Heineken’s new man in the north, John Gemmell, outlines the priorities for the former S&N business.

JOHN Gemmell wears two hats in his latest role at Heineken UK, the brewer formerly known as Scottish & Newcastle.
As the firm’s trading director for the on-trade in the north, he splits his time between his native Scotland and the north of England, where he is responsible for sales across the major, beer-loving cities of Newcastle, Sunderland and York.
Yet while it is often said the Scots share many attributes with their counterparts immediately south of the border, trends in beer sales in the two areas are markedly different.
When work takes him south of Hadrian’s Wall, Gemmell operates as the market leader.
In Scotland he has to play second fiddle, at least when it comes to standard lager.
Developing a strategy to handle the contrast is one of the challenges he has faced since succeeding Ian Norman in January.
“In Foster’s, we have our biggest volume UK [beer] product,” he said. “In cities like London and the north-east [of England] it’s by far the brand leader in standard lager.
“Our focus in Scotland is to be a challenger to the market leader. We need to be a clear challenger to Tennent’s Lager.”
While Heineken has designs on eating into Tennent’s dominance, it will not pursue a volume at all costs strategy.
Gemmell, who suggests the overwhelming dominance of Tennent’s (it has an estimated market share of 73%) risks undermining consumer choice, said the goal is to present Foster’s as a “credible alternative”.
“It’s [Tennent’s] significantly bigger, so we’re not taking it on head on,” he said. “We’re not going to throw money at it, we’re not going to take them on on price or go down the football (shirt sponsorship) route.
“It’s not about volume.”
At any rate, it’s not just about Foster’s at Heineken.
Foster’s, the brand that continues to celebrate the Aussies’ no worries approach to life, is just one of a packed portfolio of lagers, ciders and ales: as well as the so-called ‘super-six’ of Foster’s, John Smith’s, Heineken, Kronenbourg, Strongbow and Bulmers, the brewer also owns Deuchars IPA (brewed by its Caledonian Brewing Company) and the McEwan’s ales (distributed by Jygsaw Brands).
Gemmell said having so many brands means the brewer has to be disciplined. “One of our strengths is the size of the portfolio; equally if you’re not clear about your plans it can be a weakness,” he said.
One area where Heineken seems to have portfolio management just right is on cider.
Gemmell said Strongbow remains the “undisputed number one draught cider in Scotland” and reckons packaged product Bulmers, recently subject to an image makeover, is striking the right balance with the four variants it now offers.
He sees no reason why “modern cider” – the category name given to the likes of Bulmers, Magners and Kopparberg – will not continue to grow.
“It’s probably the most innovative and dynamic part of the on-trade, in a way PPLs and RTDs used to be,” he said.
At corporate level, Gemmell said Heineken has been focused on simplifying its UK business since acquiring S&N (in a
joint deal with Carlsberg) in 2008.
The strategy, designed to give “clarity” to its operations, saw it offload wholesale business WaverleyTBS last year, while costs have been cut to free up cash to invest in brands.
Going forward, Gemmell said his goal is to achieve consistency in its dealings with the on-trade, whether though free-trade accounts, national customers or wholesalers.
He said the firm was especially keen to “exploit” the route to market via wholesale partners.
That may include giving wholesalers sales incentives, though Gemmell stressed that “what you can’t do is impose a supplier on a customer”.
He also said any drive to
boost sales through wholesalers must be accompanied by a “brand-building presence” in outlets.
Such support is arguably welcome as operators continue to face tough economic conditions. Gemmell, who joined S&N in 1992, singled out the lack of finance as one of the major issues facing the trade.
While his employer has traditionally been a major lender to pubs, he confirmed a new approach was now in place.
“We’re actively reducing the size of our loan book,” he said.
“We’re still prepared to lend on an individual basis, but we’re standing back from high-risk lending.”