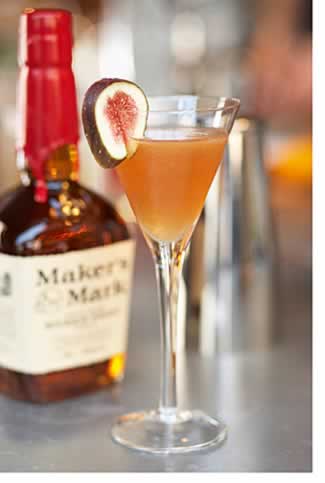 THE firm behind American whiskey maker Jim Beam is upbeat about the bourbon market in the UK, with the launch of a new brand aimed at young adults while its premium label, Maker’s Mark, continues to gain ground.

“Bourbon is very popular in the on-trade because it is very easy and interesting to mix,” said Jim Grierson at distributor Maxxium UK. “(It) is an extremely versatile spirit that provides a good balance of intense flavour and sweetness to cocktails.” This optimism seems to fly in the teeth of reports that American whiskey is facing a challenging market in the Scottish on-trade.
Recent figures from research company CGA reported an 8% dip in sales through Scottish premises between April 2010 and April 2011, admittedly at a time when on-trade volumes are taking a hit across the board.
And yet Jim Beam seems unfazed. It has reported 18% growth for Maker’s Mark over the last year as the brand is adopted by an increasing number of bars across the UK. It has been promoted as a base for cocktails and long drinks.
Grierson claimed Maker’s Mark is now the “bourbon of choice” for many top bartenders who “appreciate the lengths the distillery goes to to create a bourbon that is fantastic both served straight and in cocktails”.
And now the company is looking to tackle a fresh market with the launch of Red Stag.
Jim Beam claims the product is a UK first – a black cherry-flavoured bourbon that is designed to be drunk either straight or mixed in cocktails.
Aimed at 18-24 year-olds, it was launched earlier this year to capitalise on the growing success of flavoured spirits.
“Flavoured spirits have become increasingly popular and Red Stag allows Jim Beam to introduce bourbon and the Jim Beam brand to new drinkers who wouldn’t normally drink it,” added Grierson.
“The opportunity for Red Stag in the UK is huge and it will bring in drinkers from other categories including rum, imported whiskies and specialities.”
Red Stag starts life as a four-year-old Jim Beam bourbon, which is then infused with the black cherry flavour through what it described as “a unique artisanal process”.
In its first year after launch in the US, the brand reportedly sold 200,000 cases and Beam seems determined to repeat that success in the UK with a string of marketing activities aimed at the core 18-24 demographic.
These will include sampling at events such as festivals and university balls, social media activity and the recruitment of students as brand ambassadors.
There will also be prize giveaways and unique events, again targeting young adults.