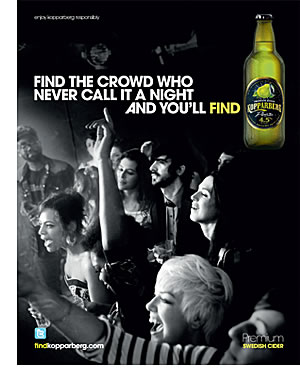 SWEDISH fruit cider Kopparberg is the focus of a fresh summer marketing assault.

The latest ‘find Kopparberg’ activity, which kicked off earlier this week, includes TV ads, radio sponsorship and outdoor, print and digital activity.
The campaign is said to be based on consumers “discovering and championing Kopparberg from a grassroots level”.
The first phase last year saw the then undiscovered indie-rock Welsh band The Joy Formidable perform a secret gig for fans, which was then used to create Kopparberg’s print and outdoor ad campaign.
This year’s TV ad, which launched on Monday (June 6) and will air throughout the summer on terrestrial and digital channels, features American noise-pop duo Sleigh Bells. Kopparberg will also sponsor the XFM X’posure show, which showcases cutting edge artists and new music.
Social media activity will run on Facebook and Spotify, and a new look has been created for Kopparberg’s website findkopparberg.com
Davin Nugent, UK managing director of COS Brands, said the activity aims to recruit new Kopparberg drinkers and “give something back to the fans who were the inspiration for the ‘find’ campaign. We are very proud of our social media presence and of our Facebook site in particular,” he said.
“Having a direct conversation with our consumers is a key part of our marketing strategy, rather than just an afterthought as part of a larger campaign.”