JONES Lang LaSalle has strengthened its standing in the licensed property market in Scotland after agreeing to acquire rival firm King Sturge. The deal, which JLL said makes it the clear leader in the commercial property advisory business in Scotland, valued King Sturge at £197 million. It brings the 43 King Sturge offices and businesses across Europe, including 24 in the UK, under the JLL banner, with the integration of the combined operation already said to be underway. 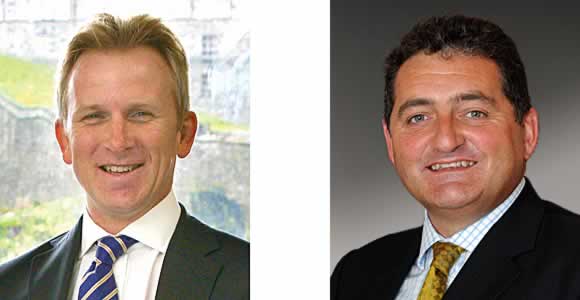 Above: Alasdair Humphery and Chris MacFarlane said the deal makes sense for both parties.

The enlarged business employs 44 staff in Scotland spread across offices in Glasgow and Edinburgh. Job losses as a result of the merger are expected to be minimal, a spokesman for JLL said, with positions only likely to be reviewed where there is duplication of functions.
Alasdair Humphery, managing director of JLL in Scotland, said the merger was “positive news for our clients and colleagues in Scotland”.
“The combined business of Jones Lang LaSalle and King Sturge will create Scotland’s leading commercial property advisory firm, offering our clients access to unrivalled depth and experience across a full range of services,” he said. “Our complementary strengths will also help us attract new clients north of the border and maintain our market leading position.”
The deal was also welcomed by King Sturge, whose partners were due to receive an initial £98m in cash when the transaction closed on May 31, with the balance to be paid out in cash over five years.
“Bringing our two firms together makes good business sense given the highly complementary strategic and cultural fit,” said Chris MacFarlane, partner in charge of King Sturge in Scotland. “Together, we will form a much stronger team in Scotland which can only be of benefit to our clients.
“We will retain our shared focus on delivering great client service ensuring we can fulfil their needs by providing a comprehensive range of services.”
News of the deal comes after JLL directors Alan Creevy and Peter Darroch left the business in April – just over three years after the founders of property firm Creevy LLH were bought out by JLL. It’s been reported the duo plan to launch a new property venture later this year.