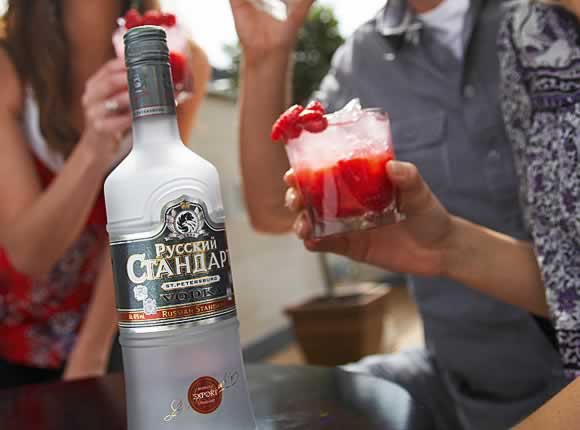 OPERATORS who underestimate the influence the weather has on consumers’ drinking habits could miss out on important sales opportunities this summer. So warns James Stocker, marketing controller at First Drinks, who reckons the seasons continue to have a hand in what people choose to drink.
The traditional shift towards lighter spirits, such as gin, vodka and rum, during the summer months is still evident, he said, with demand for refreshing long drinks and cocktails higher in warmer climes.
Such logic informs the type of drinks the distributor is promoting for summer. As well as developing a host of long drinks and cocktails based on the lighter spirits brands in its portfolio, including Russian Standard vodka, golden rum brand Mount Gay Eclipse, Hendrick’s gin and spiced rum Sailor Jerry, First Drinks aims to highlight the ‘mixability’ of its Grant’s, Tullamore Dew and Monkey Shoulder whiskies. “I think people do change what they drink depending on the weather,” Stocker told SLTN. “Traditionally there’s a dip in darker spirits in the summer. Vodka and rum are lighter and lend themselves to cocktails and long drinks, which work very well in the summer. But we’ve also got a lot of activity on our blended whisky Grant’s, and on Tullamore Dew and Monkey Shoulder, which are great for mixing. I think we as an industry have not talked enough about mixing whisky. There are some great whisky-based long drinks and cocktails for summer.”
And it’s not just bars with an established cocktail offer that stand to benefit from broadening their offer. Stocker reckons introducing a selection of simple serves can help boost profits in a range of different outlets. More and more people are into cocktails so it’s very important, even if it’s just four or five simple long mixed drinks,” he said. “They don’t have to be complicated cocktails. Cocktails and long drinks are a great way to sell brands and make more profit, which is good for licensees.”
Stocker suggested the enduring popularity of cocktails was underlined last month, when the succession of bank holidays coincided with good weather and kick-started summer trade for many pubs. Looking ahead to the rest of the season, the only minor fly in the ointment would appear to be the lack of a major football tournament. But Stocker said other sporting events, like Wimbledon and the Open Golf Championship, can help fill the gap.
“Local events are great too,” he added. “Operators can tie into an event, like a music festival, that’s near them – are they on the route people will take to the event and can they tailor their offer to tie in with that? Maybe they could introduce pitchers of drinks for groups to share. Licensees should compile a relevant long drinks and cocktail list to suit their outlet and think about their use of outdoor space. Anywhere that’s got a beer garden or terrace stands to benefit when the weather is good; the sun definitely brings people out to the pub.”