Combi-oven’s versatility can ease the pressure on chefs, suppliers say

In pub and restaurant kitchens where space – and time – is often in short supply, cooking in so many different ways is not always an option.
But it seems there’s one piece of kitchen equipment that might help overcome these challenges. Described as the “workhorse” of the kitchen by the Catering Equipment Suppliers’ Association, the combi-oven uses a combination of dry heat and steam to cook a range of different foods by different methods.
Steam, added to the oven when the food being cooked requires it, is reckoned to prevent meat drying out during roasting, retain the nutritional value and colour of vegetables, and enhance baked products, such as bread; this type of oven can also be used to bring chilled pre-cooked food to the correct serving temperature. 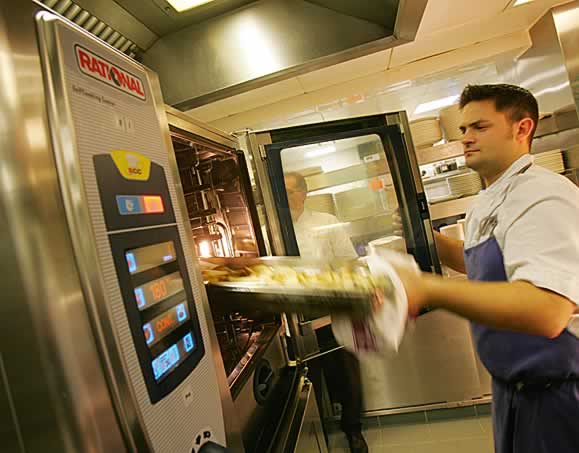 Combi-ovens use dry heat and steam to cook a range of different foods by different methods. Supplier Rational said the simplicity of its SelfCooking Centre means all chefs have to do is load it up and push a button to select the type of food; it can also be operated manually or chefs can develop their own programmes.

Ian Ring, sales director at supplier Rational, said the combi-oven can speed up cooking times, intensify flavours and maintain foods’ vitamin, mineral and nutritional values – whatever the size or style of venue. Remember, combis aren’t just for big kitchens,” he said.
“Great results, energy savings, retention of nutritional values, versatility and ease of use are as beneficial in smaller sites as in larger ones.
“A key advantage that is especially valuable in smaller sites, with an advanced unit like Rational’s SelfCooking Centre, is the ability to cook lots of smaller portions of different foods at the same time on different shelves with no cross-contamination of flavour or aroma.”
Ring advised chefs to choose a combi-oven that heats up quickly. This can save energy, he said, as it means the oven doesn’t need to be left on all the time.
Opting for an oven with automatic controls, where chefs simply load it up and push a button to select the food, can also help speed things up in the kitchen. Cleaning and maintenance should also be considered when buying a combi-oven, added Ring.
“One area that causes energy and service issues with traditional combis is limescale build-up, since it makes units inefficient and can lead to breakdown,” he said. “So choose a combi with a limescale monitor. Several manufacturers make self-cleaning combis. This really saves time at the end of the day.
Rational’s self-cleaning system is proven to do a more hygienic job than cleaning by hand – and it’s safer and easier than other systems since it uses tablets rather than liquid chemicals.”
Catering equipment firm FRIMA agrees that versatility is key when it comes to choosing catering equipment. Describing its VarioCooking Centre as versatile and energy-efficient, FRIMA said it offers the functions of bratt, kettle and tilting pans, a fryer, griddle and pressure cooker with a footprint of less than one square metre.
Ben Gourgues, head of UK marketing at FRIMA, said the system is up to 50% faster than conventional cooking equipment which has a “huge impact” on the efficiency of the kitchen. “These days almost every kitchen has space and budget restrictions – that’s why multi-function equipment is so popular,” he said. “It’s realistic to expect savings of up to 40% in energy use from using the VarioCooking Centre, compared to cooking with standard equipment.
“But the savings don’t stop there: it not only costs less to buy one VarioCooking Centre than the several pieces of traditional equipment it replaces, it also costs less to run, maintain and clean.”
Meanwhile, Imperial reckons its gas ranges also offer caterers versatility. “Having ranges that allow for a rich mix of dishes can prove lucrative for caterers,” said managing director Mark Poultney. “It gives them the ability to create innovative menus consumers want to see and that will work, not what their equipment can achieve.”