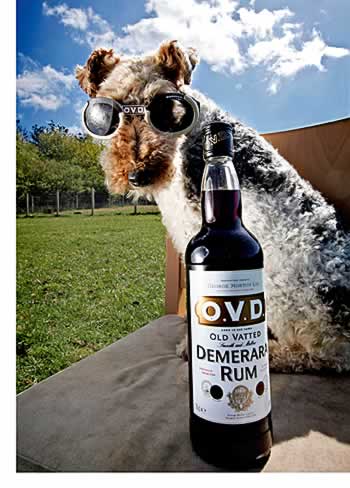 The dark rum, which is owned by William Grant & Sons, will launch the latest stage of its Sweet Spot campaign later this month as it looks to stay front of mind with its existing customers as well as reach out to new demographics. The campaign will include media partnerships with The Daily Record as well as radio stations in Glasgow, Edinburgh and Aberdeen, and will also see the brand interacting with licensees directly through themed quiz nights.
OVD (Old Vatted Demerara) claims to be the top dark rum in Scotland, catering both to Scotland’s patriotism (the brand was launched in Dundee in 1838) and sweeter palate.
“The Scottish palate enjoys a slightly sweeter taste than others south of the border, and that’s what’s helped maintain OVD as the number one dark rum in Scotland for a number of years,” said Paul Curry, brand manager for OVD at First Drinks.
The new marketing activity sees the Sweet Spot campaign enter its fourth year.
Revolving around the theme that all men have a sweet spot for something, the latest incarnation of the light hearted campaign tackles the subject of pets. It comes after research commissioned by First Drinks found some interesting, if vaguely troubling, statistics.
“When we asked if they would rather spend an evening in watching TV with their partner, a friend, a family member or a pet, it came back that 30% would rather spend a night in with their pet,” Curry explained.
“20% of all adults admitted showing more affection to their pet than their partner, which is pretty amazing really.” The survey also asked consumers about their favourite film or TV pet and the top answer, Greyfriar’s Bobby, appears in the brand’s press advertising.
In addition to media partnerships and consumer and trade advertising, the brand will also be working with publicans to introduce pet-themed questions to their regular pub quizzes.
A kit to be sent out to pubs in the next month will include quiz questions, a bottle of OVD to give out as a prize, and another bottle for the licensee to offer as free samples to their customers. In this way the brand aims to target both its main customer-base of 35+ males and a wider group of consumers who don’t currently buy into the category. Curry said the aim is to encourage trial among younger drinkers, who are more than happy to drink spiced, golden or white rums but sometimes have preconceptions about the darker varieties.
“With a dark rum you have to fight against the thought that it’s just for older men,” said Curry.
“It’s a bit like the story you’ve got for whisky. Malt whisky’s a wonderful product, but younger people tend to think of their grandad with his pipe and slippers in front of the fire. We’re trying to get younger people to try and experiment with whiskies, and it’s the same with rums.”
The new campaign launches on May 16 and runs until mid-June.

Image: Greyfriar’s Bobby, the most loyal of pets, is celebrated in the OVD campaign.