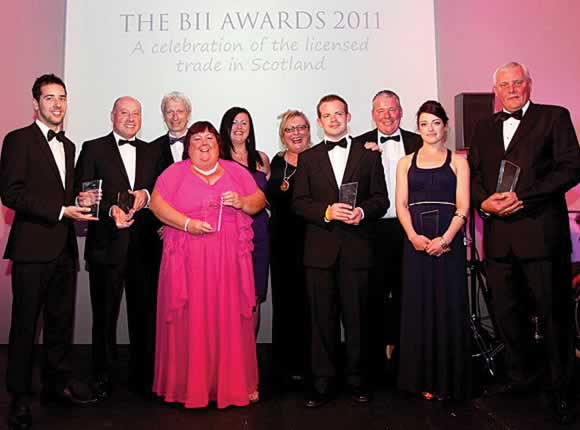 The event, held last week at Glasgow’s Grand Central Hotel, in association with Diageo, saw the BII present six awards to standout individuals, venues and business development and training schemes. Around 270 guests enjoyed a three-course meal, auction and entertainment in the hotel’s Grand Room of Glasgow.
Chairman Kenny Mitchell said it was a welcome return for the event after it was left off the calendar last year due to concerns over the financial climate. “It was great to have a successful event which saw so many of the trade turn out,” he told SLTN. “The awards ceremony reflected the great strength and depth we have in the licensed trade in Scotland. It also showed there are a number of organisations associated with the trade striving to improve the business climate surrounding it, ensuring people are coming back to pubs.”
The six awards were won by Glasgow’s West bar, restaurant and microbrewery (Best Business Initiative); the Bon Accord in Glasgow (Real Ale Bar of the Year); Dundee Best Bar None (Social Responsibility Award); Maybo (Scottish Training Award); Dundee’s Speedwell Bar (Best Traditional Scottish Bar) and Kathryn Veroni of the Auctioneers in Glasgow (Bar Personality of the Year).
Mitchell thanked the sponsors for making the evening possible. “Last year we took a decision not to run the event, not just because we didn’t want to put financial pressure on our members to take tickets, but because it was a time when our sponsors might have been looking to cut their own expenditure. And it has really worked in our favour.”