THE awards have come tumbling in this year for West, the combined bar, restaurant and microbrewery based on Glasgow Green. But according to owner and founder Petra Wetzel, the best is yet to come

West capped a memorable start to 2011 last week when it scooped the award for Best Business Initiative at the BII Scotland dinner in Glasgow’s Grand Central Hotel.
It was the fourth award to be won by West in as many months. In April, its Hefeweizen wheat beer was named overall champion in the Craft Beer in Keg category in the UK-wide SIBA (Society of Independent Brewers’) Awards, and before that it was named Scotland’s top family-friendly venue in the Scottish Restaurant Awards.
March also saw general manager Liam Bedwell crowned restaurateur of the year at the ScotHot hospitality show.
Wetzel said the recognition given to the various elements of the business vindicates the decision to launch the microbrewery with restaurant concept five years ago.
“We never wanted to be stuck in an industrial shed where nobody could go and interact with the brand – that was always the reason for setting up West as a brewery, bar and restaurant,” she told SLTN. “It’s always been about [consumers] speaking to the staff and seeing how it’s all done – that’s why the restaurant was so important. But you can only expect people to come and see you if you have a quality of food and service.”
Accolades prove bar and brewing is a winning combination, owner Wetzel says
West’s core beer range – comprising St Mungo premium lager, Hefweizen wheat beer, Munich Red and Dunkel dark beer – is now available nationwide through distributors Belhaven, Forth Wines and Matthew Clark. Customers in Glasgow are served directly from the brewery in most cases.
Wetzel said demand for the beers, whose most recent listing is at the Limelight bar in Glasgow’s new Hotel Indigo, is such that plans are in place to develop a second brewery in the city. A canal-side site in Speirs Wharf, to the north of the city centre, has been identified, but Weztel said her desire to make the plan as environmentally-friendly as possible means the project cannot be rushed.
The plant will seek to recycle water used in the brewing process, and generate heat from a device installed in the canal.
“It’s highly engineered and ground-breaking in Europe at the moment, the way we generate heat from this device,” Wetzel explained.
“We’re trialling something at the moment. Because these things are new on the market and haven’t been tried that many times before in other situations, it takes longer to plan.” 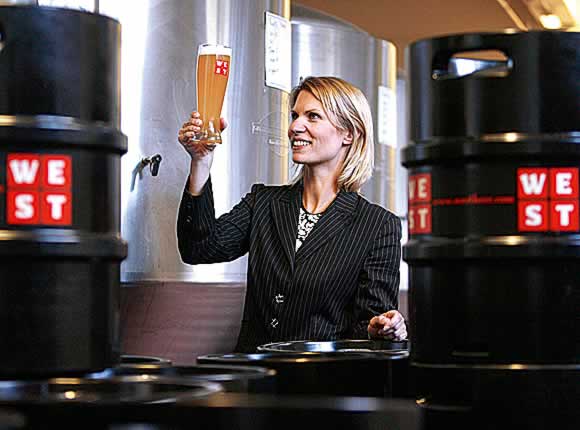 A launch date of early summer 2012 has been pencilled in for the brewery, which Wetzel said will double as a visitor attraction.
In the meantime, West is being supported on the production side by a brewer in Germany as it continues to build distribution of the brands.
In other plans, new head chef Michael Barton, recruited from popular Glasgow seafood restaurant the Crabshakk, is experimenting with new dishes incorporating the West beers. These include a new beer ice cream, a beer batter for fish and chips and a chocolate gateaux made with the Dunkel dark beer.
Wetzel said the team at West “haven’t even achieved half of what we want to achieve yet”. “I’m still raring to go,” she told SLTN. “Our year-on-year sales in the beer hall and the brewery are going up all the time. We’re seeing absolute growth in the business, which is great.”