Coca-Cola has been signed up as an official sponsor of the venue, a deal that secures full pouring rights for Coca-Cola products across the SECC’s events, conference and exhibition space.
The deal kicked off last month and lasts for the next three years. It will see a number of Coca-Cola products made available at the SECC, including Coca-Cola, Diet Coke, Coca-Cola Zero, Sprite, Fanta, Powerade, Relentless and Schweppes Abbey Well.
“The SECC is a perfect fit for our brand and we are really looking forward to working with the SECC making sure visitors to the venue, whether there for a concert, conference or exhibition, enjoy our range of drinks,” said Alan Halliday, regional director, Scotland, for Coca-Cola Enterprises. 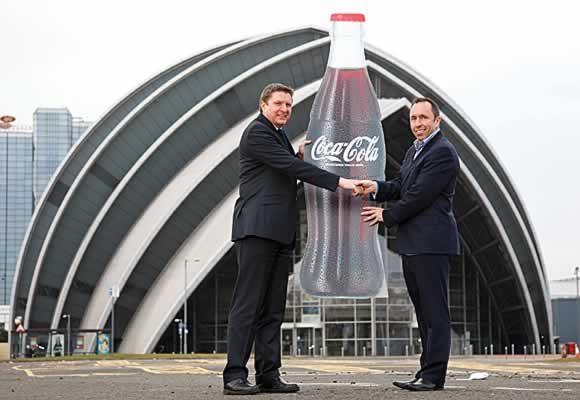 John Sharkey, CEO of the SECC, said that the Coca-Cola deal is good for the venue and for Glasgow as a whole. He said: “Aligning ourselves with quality brands and securing this new sponsorship deal with Coca-Cola is very much part of our vision to position Glasgow and Scotland at the forefront of the global event and entertainment industry.”
Meanwhile, Ian Macleod Distillers has signed a deal with the SECC that will allow the brand owner to promote its whiskies at the venue throughout the year. The partnership will focus on the Glengoyne Highland and Smokehead Islay single malts.
Glengoyne Highland single malt will be sampled at a variety of music and comedy gigs, as well as sponsoring the SECC’s ‘sounds good’ hospitality lounge. Tours of the distillery itself will also be arranged in conjunction with the SECC’s own corporate events.
And Smokehead will look to build on its association with live music through sampling initiatives at a number of the SECC’s rock concerts. The samples of ‘Smoke and Coke’ will be distributed using a mobile bar that was specially designed and commissioned by Marshall Amps.