Focus on France and Italy pays dividends for Darren Scott

DARREN Scott reckons he took a bit of a gamble when he launched Glasgow wine bar Boudoir last year.

At a time when wines from new world countries like Chile, Argentina and South Africa were topping the popularity charts with consumers, he chose to anchor the Merchant City bar’s offer on the old world nations of France and Italy.
But he had good reason for seeming to go against the grain. 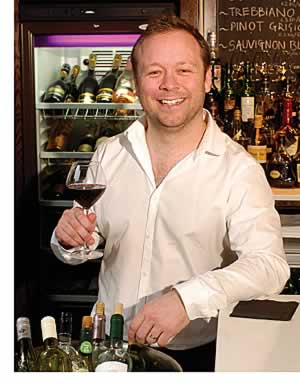 Having lived and worked in both countries, Darren had acquired a knowledge and appreciation of their wines, not to mention the back-street wine bars of Nice, Verona and Rome which he based Boudoir on.
“Choosing to focus on old world wines was a bit of a risk because for the last five years or so it’s all been about new world wines,” Darren told SLTN.
“But I think the growth of new world wines has been led, not by any form of taste revolution, but by what’s been offered. I wanted to open it [old world wine] up to people and make it more accessible.”
Darren reasoned that providing a good range at attainable prices could convince consumers to try wines they hadn’t previously encountered.
Three suppliers – Alexander Wines, Liberty Wines and Delitalia – were used to compile a 100-strong offer, including a good number available by the glass as well as bottle.
These include seven house white wines (ranging in price from an Italian Bianco Veronese at £14.95 a bottle to an organic Viognier from France, priced £20.95) and seven house reds, running from an Arpeggio Rosso at £14.95 to a Beaujolais at £21.95.
On white, the selection extends by a further 15 bins available by the bottle (ranging from a Cotes du Gascogne at £19.95 to a Chablis Grand Cru costing £49.95) and the same is true on red, which run the price gamut from an Italian Bardolino at £19.95 to the Barbaresco ‘Rabaja’ 2006 at £138.45 for a magnum.
The region of Piemonte in north west Italy, where Darren lived for a while, is well-represented on the list.
Despite the focus on wines from France and Italy, the new world is not absent from the list.
A nine-strong range of new world whites starts from a South African Chenin Blanc (£19.45), with an Australian Chardonnay priced £27.95 at the top end of the scale.
The list also features 11 new world reds, from a Chilean Cabernet Sauvignon at £20.45 a bottle to a South African Pinotage at £27.45.
Spain, Austria, Germany, New Zealand, Argentina, Portugal and the US are also represented among whites and reds, alongside three rosés, from Spain, Italy and France.
On Champagne, Boudoir majors in Louis Roederer, stocking its Brut Premier (£8.45 a glass or £49.95 a bottle), Brut Vintage 2003, Brut Rosé Vintage 2004 and Cristal Brut 2002 at £249.95 a bottle. There’s also a Bollinger and a Laurent Perrier.
Three Italian “sparklers” complete the line-up: Prosecco, Prosecco Rosé (both available by the glass or bottle) and a Franciacorto Cuvee Bellavista at £54.95 a bottle.
Prosecco is said to be Boudoir’s biggest seller, averaging between 50 and 60 bottles a week.
But it seems it’s not at the expense of the other wines on the list.
Darren said the 14 house wines available by the glass are turned over quickly, crediting his decision to offer 125ml or 175ml serves with encouraging consumers to ‘shop around’ the wine list.
He reckons his pricing structure and the training given to his eight staff have also played a part.
“The wine list is really coming in to its own now,” Darren said.
“We’ve broken it down by region to make it easier to understand, which was often the problem with old world wine.
“If you’re going to offer as many wines as this you have to make it affordable. Obviously there are margins we need to achieve but having three suppliers allows me to shop around and get good support.
“This is a contemporary wine bar; it’s lively and vibrant and the price point has to match. All these things have to balance.
“I knew if I wanted people to try different wines I had to offer them smaller glasses.
“It was a bit of a risk – obviously I’d get a higher turnover if I sold 250ml but I’m sticking to my guns and the regulars are trying different wines each time they come back.”
Despite its initially flurry of success, Darren’s not quite finished with Boudoir yet. He plans to add an off-sales element to the bar in the next couple of months; he’s aiming to launch a monthly wine club, giving his customers the chance to sample some of the wines not usually available by the glass. He also wants to expand the food offer.
The long-term aim, he said, is to “tweak” the list to accommodate new vintages and add a couple of new wines every six months.
So far the decision to focus on wine from the old world is paying off.
“I’m really happy with how it’s going so far,” he told SLTN.
“Because of the type of bar it is, it was never going to explode onto the scene but we’re on target with the turnover we anticipated at four or five months in.
“I was a bit wary of only doing a handful of new world wines but it’s not been an issue.
“It’s about accessibility. People are drinking Pinot Grigio and Sauvignon Blanc because they’re widely available but once they try different old world wines they really get into the spirit of them.
“It was a bit of a risk but it’s going really well and we’re building up a nice repeat clientele.”

Scots turn to the dark side