The latest in its series of soft drinks reports, published last week, showed total sales in the UK reached £9.4 billion. Convenience stores and other take-home outlets delivered much of the growth. 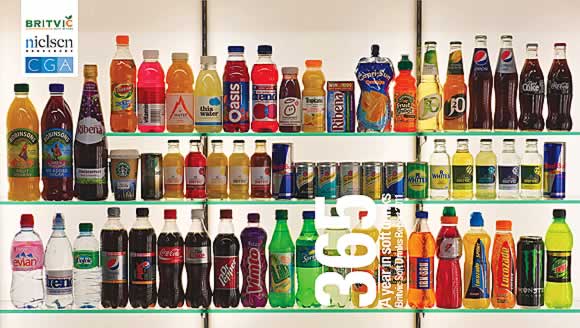 On-premise sales value held steady overall – with cola the star performer and sales in foodservice said to be strong. The 2011 edition of the Britvic Soft Drinks report, which uses data from analysts Nielsen and CGA, showed the value of soft drinks sales up by just under 1% in 2010 to £2.83bn in the on-trade and by 6.6% in take-home to reach £6.6bn. Owing to changes in the data supplier for the on-trade analysis it’s difficult to robustly compare 2009 and 2010, Britvic said. But the figures show cola remains the biggest selling soft drinks product in on-trade outlets. On the report’s estimates it increased volume by 2.5% and showed value growth of 8.5%.
Pepsi, the cola brand handled by Britvic, remains the biggest selling pub soft drink but the value of its sales dropped by 1% to £286m. It is now being challenged for the top spot by Coca-Cola, which added more than 5% to its volumes and saw value jump 13% to £269m. Juices and juice-based drinks suffered in the on-trade; J2O sales dropped 9%.
Britvic on-trade chief, Paul Linthwaite, told SLTN he thought the success of draught cola showed that the family market was looking for value. But J2O had been a major success since its launch, he said. It had shown that a soft drink could be seen as part of a round and had a “great bar call” and Britvic planned major support for it in the coming year, he added.