THERE’S a new jewel in Speyside’s crown in the shape of the stunning Hotel 1881 at Archiestown.

And to say it has been a labour of love for the Murray family, who have owned The Dowans Hotel in nearby Aberlour for the past ten years, would be something of an understatement.

Having bought the former Archiestown Hotel back in September 2018, it was 22nd April 2022 before the hotel opened its doors, with the Murrays having overcome a challenge or two during the refurbishment project, not least of which was the COVID-19 pandemic.

The ensuing industry-wide recruitment challenge has also impacted the project, with the family opening the 11-bedroom hotel on a bed and breakfast basis initially – with guests able to dine at sister hotel The Dowans – until such time as they can implement the quality food offer intended for the hotel.

It may not be quite the launch they had planned due to circumstances beyond their control. But the Murrays’ tenacity and business vision – not to mention the flexibility being a family-run business affords – have been key in helping them navigate the challenges.

And, when SLTN caught up with the family at Hotel 1881 a few weeks ago, their delight that it’s now welcoming guests – and in high numbers – is clear to see. 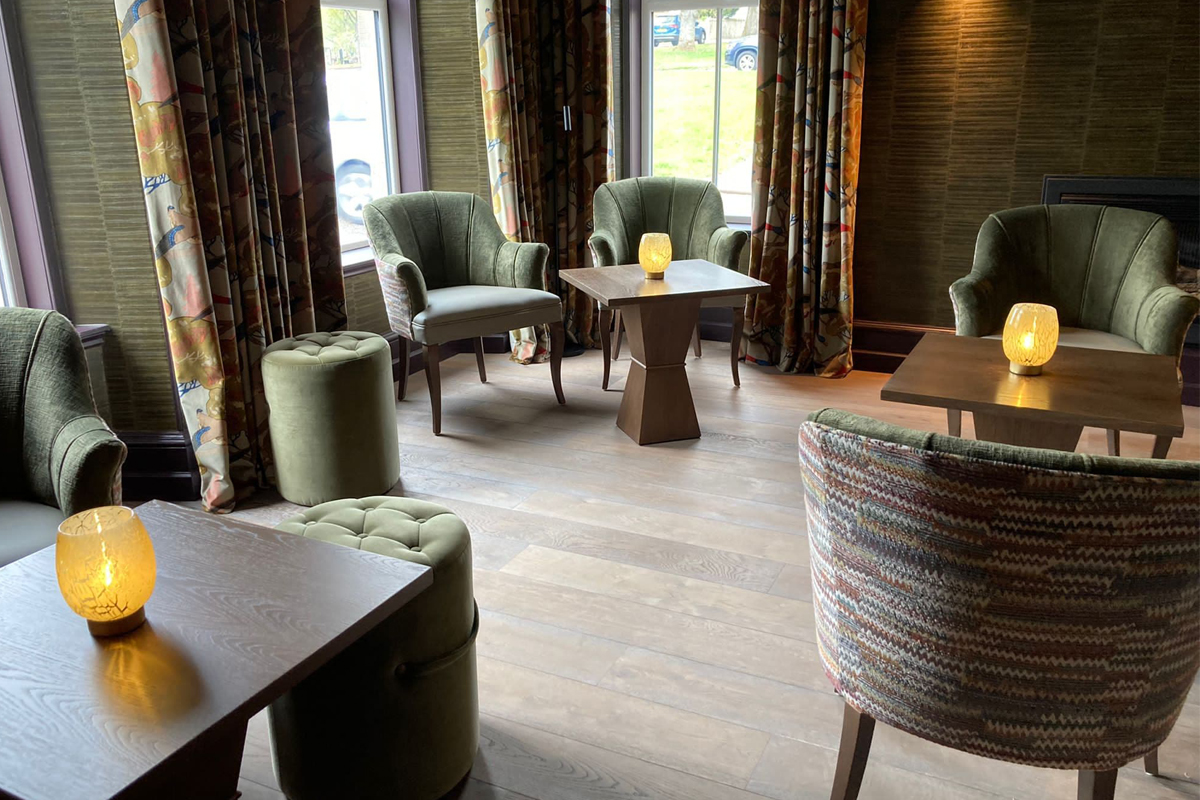 “We are very excited to be getting this place open,” said Lauren, who, together with sister Steph, runs the business as parents Michael and Marie seek to take a step back after the latest project.

“It has literally been blood, sweat and tears.

“We are a couple of years behind schedule but we’re here now and that’s all that matters.”

“We, like everyone – and not just the hospitality industry – are suffering the same issues and recruitment is a challenge but we will get there,” she said.

“From a bed and breakfast perspective it’s going really well.”

It was this demand for accommodation that was a key driver of the expansion.

The family initially scoped out the possibility of building lodges in the grounds of the 16-bedroom Dowans but ultimately decided on a second hotel. And so they bought the former Archiestown Hotel and work on the £1 million project got underway – albeit in stages due to the pandemic.

When it came to the interior, the aim was to ensure the new Hotel 1881 – named after the year in which the Archiestown property was built – had the same high quality finish but an entirely different character to its sister hotel.

Again working with Glasgow-based Chelsea Mclaine Interior Design, the company with which Marie worked on the Dowans’ interior, the family set about putting their own stamp on the place.

Hotel 1881 certainly has the same luxurious look and feel to its sibling – and shares some subtle characteristics.

The Dowans’ lantern logo, inspired by the Murrays’ 15 years spent living in Asia, has been applied to Hotel 1881; they adopted the same approach as at The Dowans of giving the bar and restaurant areas a ‘name’ and a ‘number’ (MBar and restaurant ‘57’ at The Dowans, and Archies Bar and restaurant ‘88’ at Hotel 1881); and there are further subtle nods to the family’s time overseas throughout, from the name of the restaurant – eight is considered a lucky number – to the monkey design on the wallpaper in the private dining room, a reference to the year of the monkey.

And while the Dowans bears more of a contemporary classic look in muted tones, Hotel 1881 features a bolder colour palette, with bright schemes and fabrics throughout. 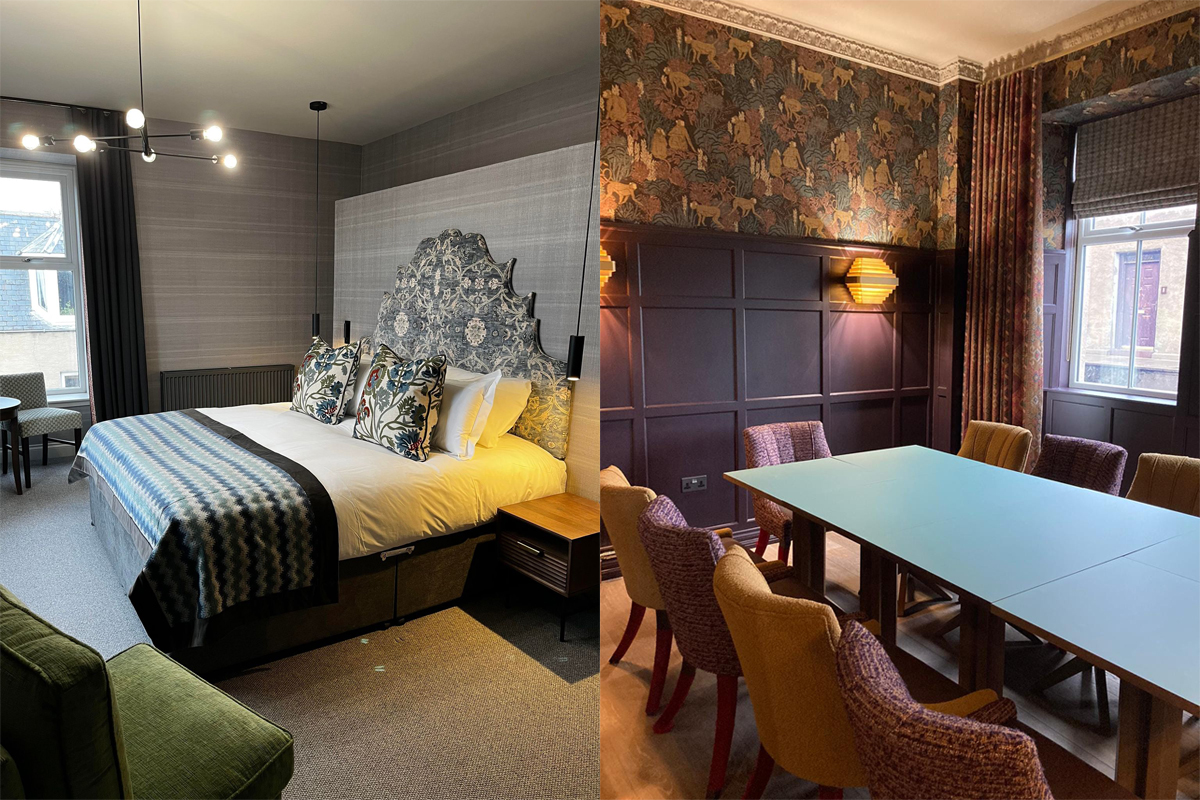 The restaurant, for example, features pink tones; while rich hues of green have been used in the cosy snug area; and plum, mustard and dark green feature in the private dining room.

Archies Bar at the rear of the property, meanwhile, has an altogether lighter look and opens onto the substantial outdoor terrace area; and each of the 11 bedrooms has been given its own unique design, with the same high quality finish throughout.

The offer at Hotel 1881 has also been designed to complement that of its sister hotel.

Archies Bar majors in wine and small-batch spirits and will offer a small plates menu, while the aim for 88 is to create a fine dining experience.

Creating a “different personality” for Hotel 1881 was key, according to Michael.

“We didn’t want people going to Dowans 1 and Dowans 2, they have to be seen as Dowans and 1881 so no cannibalisation is the hope or the aspiration, hence the offer is different, the feel of the place is different,” he said.

“The quality standards are the same but the cool or quirkiness or whatever you want to call it is possibly higher here or more obvious.

With corporate guests accounting for 70% of the business, the return of that market has obviously been welcomed, alongside the resumption of the region’s annual whisky festival and the return of international travel. 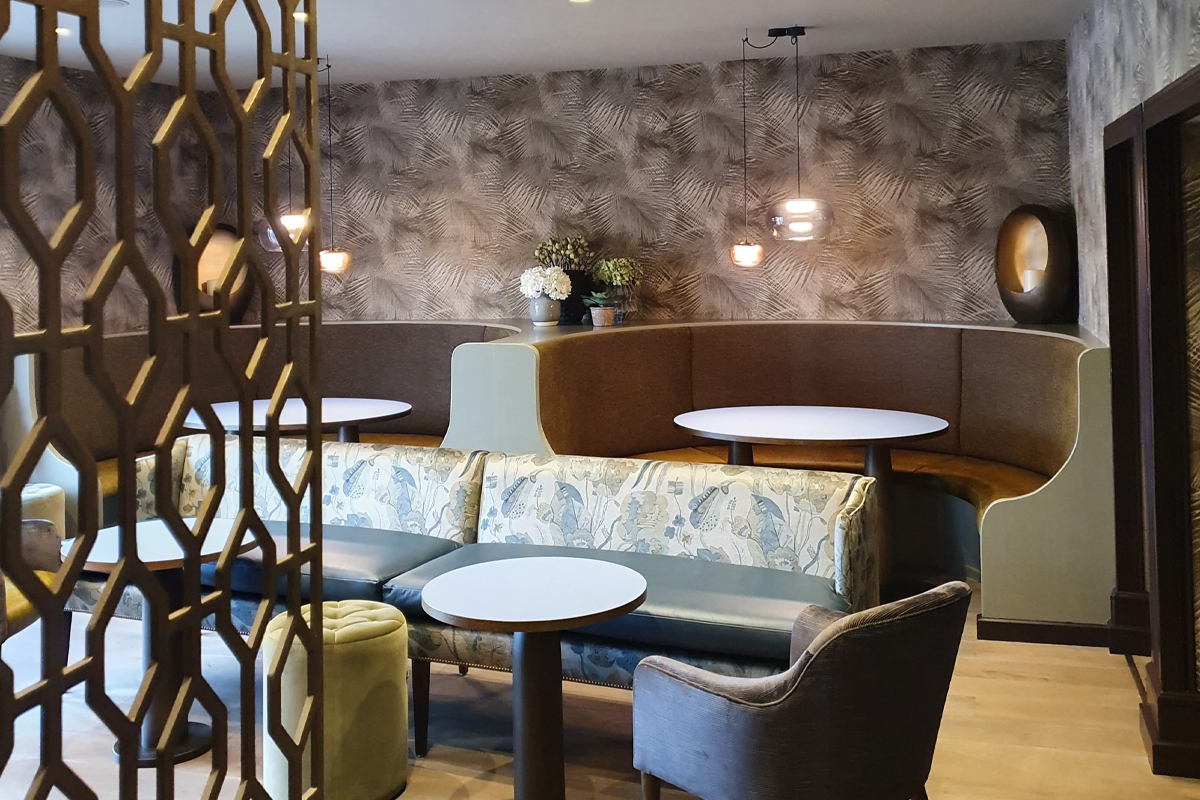 The burgeoning domestic tourism market has also brought large numbers of new guests. And, of course, the local market which is so important to the family.

“It is very much about a long-term commitment to the area,” said Michael.

“We’ve always been out there supporting the development of the area, we’re very involved and very much committed to the hotels forming part of the social fabric of the area.

“We’re excited about achieving what we aspire to achieve and that is to give back into the community again, it’s always been about that.”

It’s a sentiment shared by Steph and Lauren.

“Although we’re not from Speyside we moved into the area and we’ve come to love it, it’s our home and we’re really well-supported in the local area,” said Steph.

“They recognise what it is that we’re trying to do so there was such a huge amount of excitement when they found out we had this [1881].

“There was so much excitement for this to open – three and a half years later and it was still palpable. It’s so nice to see other people’s excitement as well as our own because that means that they want it just as much as we do.”