Rum business was a change of direction for Lanarkshire couple 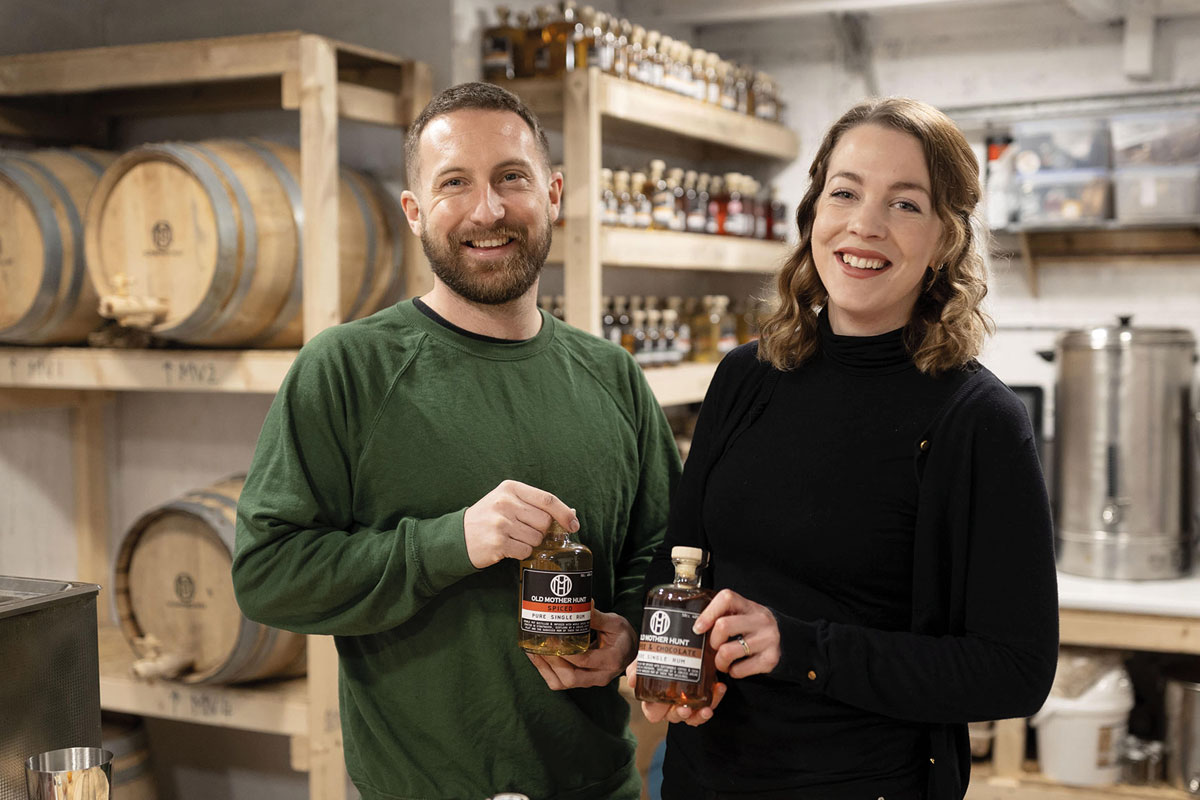 LANARKSHIRE couple Becky and Matt Hunt, owners of Old Mother Hunt rum, are a pretty solid example of making the best out of a bad situation.

At the beginning of 2020 Matt was a pilot for Flybe, with Becky a full-time mum to the couple’s two young children.

But when Flybe went into administration Matt was out of work and the family without an income.

Then, as if things weren’t bad enough, there was the small matter of a global pandemic.
As the first lockdown wore on and it became clear that things weren’t going to return to normal any time soon, the couple decided to take matters into their own hands.

“We realised quite quickly we’d have to work for ourselves because there just weren’t any jobs,” Becky told SLTN.

“We wanted a pandemic-proof business and we thought ‘why not rum?’ It’s so flavoursome and it’s quite an under-acknowledged spirit in the UK.”

It was a dramatic change of direction for the couple, neither of whom had any experience with distillation.

However, as Becky looked into the business side of starting a distillery, Matt threw himself into learning distillation, pouring over books and videos as well as talking to established distillers.

Old Mother Hunt launched in November 2020, produced initially in conjunction with an established London distillery, which provided the base white rum before Matt and Becky re-distilled and spiced it to create their products.

The name was drawn from a family in-joke.

Becky explained: “I had our daughter when I was 25. I was the youngest of four children in my family and it was the running joke that I went from having a normal 24-year-old life, pretty carefree, just working and living life, to suddenly being the Old Mother Hunt of the family.

“It’s a name that people will remember and it means a lot to us. And we started the company for us and for our children – to provide a future for them.

“So it was kind of perfect.”

As of May last year, when the business secured its distillers’ licence, everything is now made at the couple’s Strathaven home.

The business also produces several seasonal rums, including Dark, a version of the white rum infused with toasted chestnut staves (42% ABV); Smoky Oak, produced by smoking the fermented molasses prior to distillation (40% ABV); Winter Spiced, a festive version of the spiced rum featuring flavours such as cinnamon and orange (40% ABV); and Coffee & Chocolate (40% ABV), which has been infused with coffee and cocoa beans.

All of the rums are produced in small batches in Strathaven using natural ingredients, with ideas for new flavours coming from conversations with customers via social media as well as with other distillers.

Becky said: “Matt spends a lot of time reading about rum and speaking to other distillers.

“In America the rules are incredibly different to the UK. You get a lot more people distilling just as a hobby for fun and there’s quite a huge community where they discuss flavours and what they’re trying.

“So he’s quite an active part of that and discussing different flavours and getting inspiration from other people as well.”

The reaction to the rums so far, said Becky, has been “just amazing” and the brand is now stocked by independent retailers across Scotland as well as sold direct through the company’s website and online suppliers including Master of Malt.

And with the brand making inroads in the retail sector, Old Mother Hunt now has the on-trade firmly in its sights.

The brand is already stocked by nearby venues including Crossbasket Castle in East Kilbride and Strathaven Hotel as well as some local pubs and bars, but Becky has ambitions of growing the company’s on-trade business across Scotland.

“It’s been difficult because of the pandemic – obviously the bars were shut and then they were very nervous about taking on new stock.

“Things are opening up a lot more this year.”

The understandable caution of on-trade operators isn’t the only challenge, however.
Becky said that, although she is confident demand for Scottish-made rum will continue to grow, the category does still have hurdles to overcome in terms of how it is perceived by some consumers.

“I think there’s a huge boundary to drinking with lack of education on how to drink it,” she said.

“If it’s not rum and Coke or rum and ginger beer, how do you drink it? That’s a big part of it.

“There’s so many amazing cocktails. Or even just a rum and tonic with a grapefruit slice.
“Rum is beautiful, and I think as more awareness grows that it’s not just the spirit in your dad’s cupboard that you pinch when you’re a teenager, I think the sector will increase.
“It has been growing steadily and I think it will carry on growing.”