IT began as a simple plea to the public when venues reopened after the second COVID-19 lockdown: be kind to hospitality.

With trading curtailed by a raft of restrictions, the hospitality industry was faced with not only restarting after several months of closure but the added challenge of communicating to consumers – and encouraging their compliance with – a series of complicated and frequently-changing rules.

Graham Chalmers, general manager of Radisson Red Glasgow – the Forrest Hotels-owned 174-bedroom hotel with rooftop Red Sky Bar which opened in April 2018 on the banks of the Clyde next to the Scottish Event Campus (SEC) and Hydro – had experienced the public’s impatience and frustration with the hospitality regulations.

And, speaking to his peers across the industry, it became apparent just how widespread the issue was.

It prompted Graham to launch the #BeKindtoHospitality campaign in a bid to encourage the public to be patient and understand that staff were doing their best whilst adhering to restrictions.

“Ultimately it was a really challenging time for everyone,” said Graham, whose efforts were recognised when he was presented with the SLTN Hospitality Hero Award at the 2021 SLTN Awards.

“It was seeing it myself and speaking to other people in the industry.

“That was really the driver.”

It was a message that resonated throughout the industry, with the campaign gaining backing from operators right across Scotland. It quickly garnered support south of the border too, with backing from the likes of UK Hospitality chief executive Kate Nicholls and Greater Manchester’s night-time economy adviser Sacha Lord. And it was picked up overseas, with hospitality companies in Canada, the US and Thailand endorsing the campaign.

“I was humbled by the magnitude of the people that got behind it,” said Graham.

“I never expected it to take off like that. It just started as a ‘how can I help my own team and others’ and it snowballed.

“Hopefully it did something to help; hopefully it changed a few people and someone had a better day.

“Winning the SLTN Award was amazing! It kind of closed out the year – another interesting year – and was definitely a highlight for sure.”

The #BeKindtoHospitality campaign wasn’t the only one of Graham’s initiatives to gain serious traction.

Radisson Red’s Lockdown Livestreams, which saw a host of names – from international DJs to Irvine Welsh and The Fratellis – livestream sets, notched up millions of views around the world and raised tens of thousands of pounds for charities, including The Ben, Hospitality Health and SAMH. Other streams included a Saturday Kitchen-style TV show with chef and DJ Michael Kilkie and DJ Jon Mancini, and two-day virtual music festival, RedFest.

As well as raising money for charity and entertaining viewers, the virtual events gave Graham a creative outlet and kept the hotel’s name alive during what were challenging times.

“It kept me engaged; it energised me,” he said.

“The other thing was I took over the social media during lockdown so I was doing all the socials myself and I really enjoyed it.

“Literally every day during lockdown if there was a nice sunrise or sunset I’d post it, or a picture of the empty terrace on a sunny day with something like ‘hopefully not too much longer, what’s the first drink you’ll order?’ Just fun stuff and trying to be a bit Glasgow and give it personality. We were visible during the lockdowns and it kept the brand alive, 100%.” 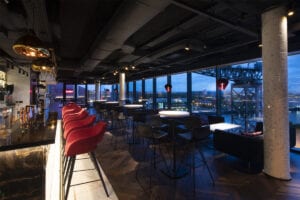 It certainly seems to have paid dividends.

Graham, who joined Radisson Red Glasgow in February 2019 having previously worked at Malmaison Glasgow, Hotel du Vin Edinburgh and One Devonshire Gardens in Glasgow, said the hotel has performed well since reopening. And he is confident that will continue, despite industry-wide challenges like increased costs, VAT returning to 20% and the resumption of business rates bills.

“The world’s not back to normal but we have started in a good position,” he said.

“We had a very busy February from an F&B perspective; the Hydro’s back open, we had Valentine’s weekend.

“And then March has been good as well. We had five days in a row where every day was like Saturday night because the hotel was running full and F&B was busy with it. And we’ve had events, like our Boogie Brunch.

“Looking ahead, the outlook is optimistic.

“I think for us it’s very much trying to be pioneers.

“We’re trying to be at the forefront of doing things and not jumping on a bandwagon; we’re constantly on our toes.

“Ultimately it’s about keeping the team engaged, keeping the guests happy and looking at how can we stand out from the crowd.”