Award-winning Dundee bar has spirit at its core

ONE of the first pieces of advice Amy Watson received as she embarked on her career in the hospitality trade was that British people, first and foremost, eat and drink with their eyes; presentation is the basis of a successful venue.

It should, therefore, be no surprise that the Bolton-born owner and director of Gallery 48 in Dundee describes a visit to the gin, art and tapas bar as “an introduction to the art of mixology and creative food” for anyone who pops in to view the regular exhibitions held in the venue.

“When you’re stood on the outside of the bar it looks really dramatic with the white walls and high tables,” she said.

“It’s certainly deceiving to the eye from the outside.”

The 40-cover unit – winner of the 2019 SLTN Gin Bar of the Year award, in association with Schweppes – was opened in 2016 by the Bon Viveur Group (BVG), which also counted local venues The Tinsmith and The D’Arcy Thompson in its portfolio.

“As competition grew in Dundee, we [members of Bon Viveur Group] decided that we needed to concentrate on a venue each, so that gave me time to buy out one that I wanted myself,” said Amy.

“I got married in Spain, love all things Spanish and I’m really into art in my spare time, so the concept was everything I enjoyed and I wanted to be passionate about something. I didn’t want this to be just a job. I wanted to give my whole life to something.”

A university graduate in fermentation and distillation, Amy breathed new life into the venue’s gin range when she took ownership of the business; the bar now boasts a collection of 96 bottles, eight of which are from Spain.

She said: “I love Spanish gins, I love how they drink gin out there and the way it’s served. Two seasons ago people started drinking gin from moon glasses and goblets, but in Spain, they’ve been doing that since gin began and we carry on that tradition over here.

“I educate my consumers and they return because they want to work through all of my gins.

“They know that our gin selection is ever-changing and that we stock the hard to find gins like the Ferdinand’s, the Bobby’s and the Dorothy Parker that you can’t get anywhere else in Dundee.

“Pink gin is popular in Dundee and we were known in the city to offer something different from Beefeater pink – we have Larios Rose which is our biggest seller.”

Amy’s passion for Spanish culture has also played a key role in her recruitment process; Gallery 48 is involved with the city’s Queen Elizabeth College Erasmus exchange programme. This link allows Amy to employ Spanish students who have never worked in hospitality before.

“I have three front of house staff who are Spanish and my kitchen staff are also Spanish,” she said.

“My Spanish staff often bring friends to the venue, so it really is a home from home for them.”

The changing tastes of gin drinkers is irrefutable, according to Amy, whose first job in hospitality was in a nightclub.

She said: “When you were asked for a gin and tonic you answered, ‘lime or no lime?’ and tonic as a mixer was a given. We still serve drinks in this bar which feature gin, tonic and lime, but we present it completely differently.

“We often serve gin and ginger ale and that works very well for us – it just goes to show you that there is a whole other world beyond the G&T.

“If a customer comes in and doesn’t like gin because of the taste of tonic, we guide them through our offering until they find something they enjoy.”

As figures continue to show persistent growth in the category, selecting the right gin to sit behind the bar is crucial for Amy.

“I have a tick box list behind each gin I stock: how it’s made; does the company make its own white spirit; the ethos behind the brand; is it ethical and sustainable?

“Style is another crucial element – small-batch, flavour batch, navy strength – I can’t have too many of the same style. If there is a story behind a particular gin it makes it much easier for me to connect the bottle with a customer.”

Training is therefore imperative for Amy and her staff.

“We have to go out and immerse ourselves in the gin community to keep up to date with trends and releases – tasting and listening is key,” she said.

“The Fever-Tree manual is on the counter beside the gin bibles. If my staff don’t know something they will find the answer.

“It doesn’t just stop at stocking the best gin, it’s having the best ice, the best spirit enhancer, all in the best vessel and presented correctly.”

“There’s a wheel when it comes to mixers; no matter if the gin is sweet, dry, floral, herbaceous, we have to pick out the botanicals but not overpower or drown out the things that highlight the overall taste. Hendrick’s, for example, is known for cucumber, so we need to make sure that we are using something palatable like the Mediterranean tonic that plays with it and doesn’t take away the cucumber.”

“Spanish gins are floral, sharp and citrus, whereas Scottish gins are heavier on raspberries, tayberries and blueberries, etc. Normally the white spirit for Scottish gins is bought in from elsewhere but in Spain it is distilled in the same place and I think that is reflected in the taste. Generally speaking, Scottish gins have a higher ABV than Spanish gins and are more juniper-led – there is a palate for everyone, and education is key.”

“Taste the gin straight three times – first time your body says ‘no’ and it panics because it’s alcohol and it’s strong; second time your nose lets you try it; by the third time your body knows it’s OK and you can enjoy the flavours – then add your mixer.”

Wholesalers are ready for reopening 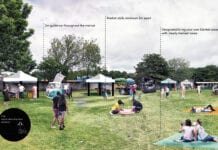