AMERICAN culture has had a significant impact on Scottish hospitality through the years, from venue design – think speakeasies and Mad Men-inspired spaces – to drinks ranges.

But some of the biggest US influences in recent years have been on the food side of the industry, with dishes such as gourmet burgers and hotdogs becoming staples in pubs and bars around the country.

It’s something Mark Teed has been well placed to see in his role as head of food at Star Pubs & Bars.

Teed said he has seen demand growing across the Star estate for US-influenced dishes as well as new US-inspired food occasions.

“They’re incredibly flexible and easy to tweak for added variety and interest by adding regional BBQ sauces from states such as South Carolina, Kansas, Louisiana and Texas or toppings such as low and slow pulled meats,” said Teed.

“Stacked toasties are getting more menu listings featuring traditional Scottish ingredients that have been given a US tickle – think Ayrshire smoked maple-coated bacon.”

Vegan menus is another area where a US influence is being seen.

Teed said dishes including jackfruit wings and cauliflower nuggets have been making their way onto Scottish menus in recent years.

US food culture is even influencing the times people like to eat during the day, according to Teed.

He described both breakfast and brunch as “fast-growing meal occasions” in the on-trade.

“The American influence on this occasion is huge, with waffles and buttermilk pancakes and toppings such as apple and cinnamon,” said Teed.

And when it came to advice for operators Teed said the best approach to an American food offer is to “keep it simple”.

“Use a few key ingredients to deliver a US-themed menu and focus on the best sellers – burgers, dogs, wings and waffles,” he said. 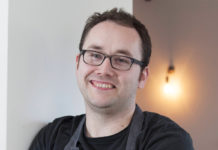