Family-owned distiller moves into mixology with its first cocktail comp

A FAMILY-owned distiller has plans to tackle the national cocktail scene after the success of its first, Scotland-focused competition.

Working with distributor Pol Roger, Glenfarclas launched its inaugural cocktail contest in April, challenging bartenders to create a cocktail using its Glenfarclas 105 cask strength whisky that can be used at events including the Cheltenham Festival, where Glenfarclas is a sponsor.

Heats were held in Aberdeen, Edinburgh and Glasgow with six finalists then competing against each other at the distillery itself, where their drinks were judged by a panel that included Glenfarclas chairman John Grant, who is the fifth generation of the family to own the distillery.

Glasgow bartender Kevin Carr, of Urban Bar & Brasserie, took the top prize at the final with his cocktail, Green Grass Fizz, which combined Glenfarclas 105 with sugar snap peas, fresh lemon juice, agave syrup and carbonated coconut water. It took its name from the distillery, which means ‘glen of the green grassland’.

The cocktail will now be the signature serve for Glenfarclas 105 for the next year, and Carr will return to the distillery for a three-day internship with distillery manager Callum Fraser.

Speaking at the final Grant admitted that the competition was a departure for what is a traditional whisky business.

“I confess I’m not a cocktail person,” he said. “I’m an old-fashioned distiller and in my youth, whisky, particularly malt whisky, was the one thing that was kind of taboo to use in cocktails. You could have it straight or with water, or in a Rusty Nail, and that was about the extent of it.

“So this has been quite an experience, which I have thoroughly enjoyed.”

The competition was headed by Glasgow-based Louise Gallagher, sales manager for Scotland at Pol Roger, who said Glenfarclas 105 was selected “because it’s got the history, it’s got a story behind it and it’s one of those brands that stands out on the back-bar”.

But she added there will be careful planning before any further cocktail competition activity to ensure it fits with the Glenfarclas business.

“A commercial brand doesn’t belong to anyone, really, anymore, but this is [the Grant family’s] life,” she said.

“They’ve built this. So you have to be very, very careful with what you’re doing with it.” 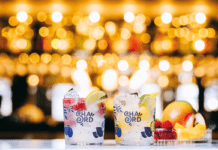