Glasgow craft brewery unveils plans for a venue and expansion

GLASGOW-based craft brewery Merchant City Brewing Company is looking to the future, with plans to open its first bar, expand its beer production and a potential move into gin.

The brewery, which was founded by Allan Rimmer and Douglas Wheatley in late 2017, currently produces a five-strong range of core beers – including its flagship 4.7% ABV American Pale Ale – alongside its small-batch, experimental series and barrel-aged projects, such as the Jaggy Imperial Stout (7.4% ABV), which is aged for six months in Glenfarclas casks.

Speaking to SLTN, Allan said that a taproom had always been on the cards – and was initially supposed to come first.

“We always saw the business being a taproom and it grew arms and legs when I came across a brewing kit for sale down south and we bought it, brought it up here and set it up,” said Allan.

“So, we came to market the way we didn’t anticipate, but it’ll stand us in good stead when we get our venue and we get it up and running.”
The company remains in talks to secure its first bar, which Allan said will focus on showcasing Merchant City Brewing Company’s own beers, as well as other craft brews from Glasgow and beyond. 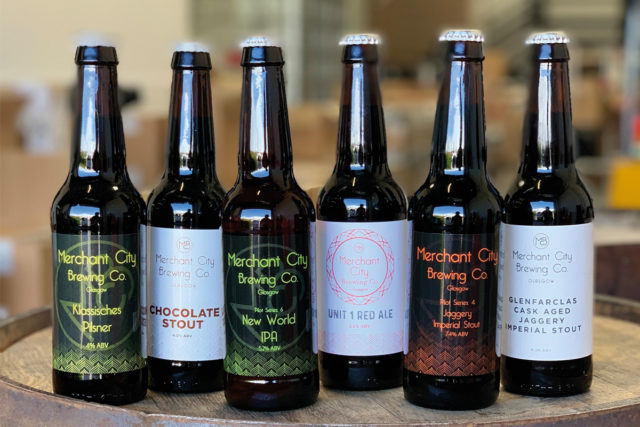 “It will be a landmark venue we’re looking to go into,” he added.
The company’s beers, which are created by head brewer Adam Gray, are also set for a format change as part of the expansion plans.

With a packaging line set to be installed, Merchant City Brewing’s beers, which are currently bottled, will move to cans from the start of next year, according to Allan, who said that bottles will be reserved for special edition releases going forward.

With its efforts focused on growing sales in both the on and off-trade, the firm’s ambitions could even extend into spirits, said Allan.

“We’ve been looking at our own gin,” he added.

“We’ve got good relationships with guys in some of the smaller distilleries, so it’s definitely something that’s got legs.”