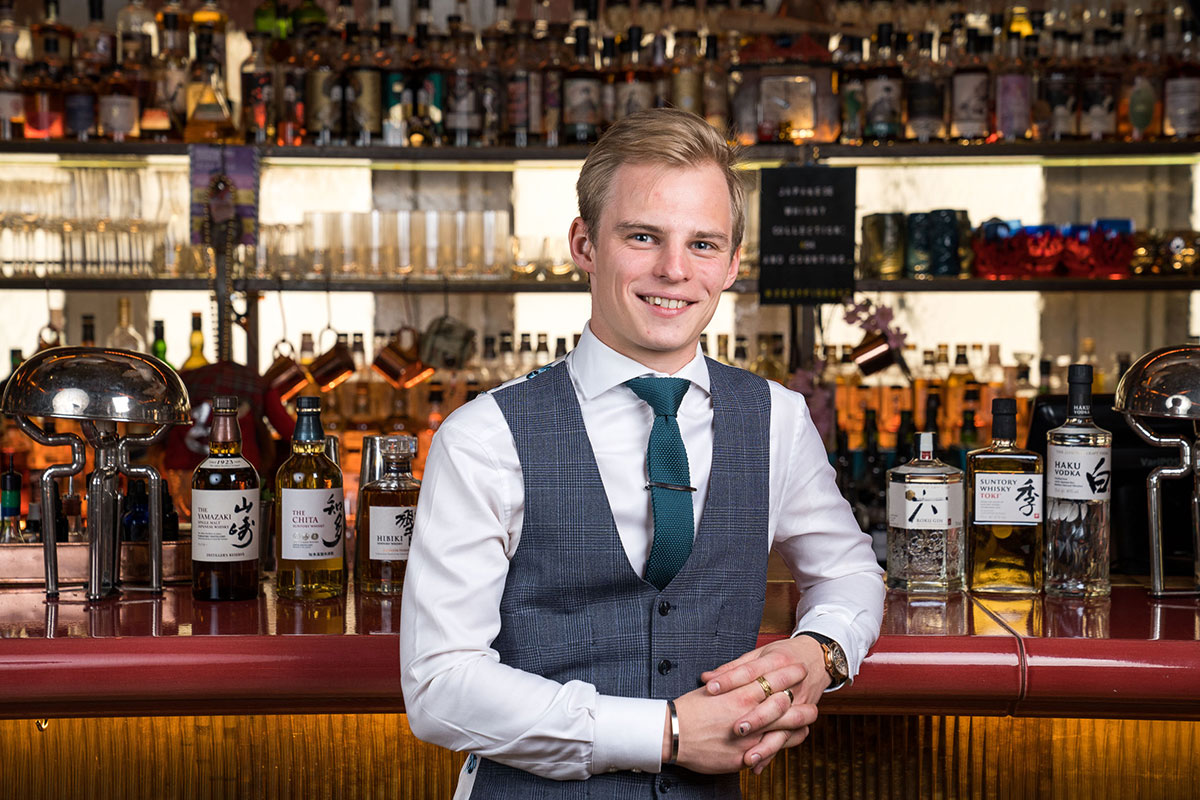 James Bowker was appointed UK ambassador for the House of Suntory range of spirits earlier this year. Having worked in bars for more than a decade – including in Japan – James has now been tasked with building the profile of Suntory’s Japanese spirits across the UK.

Here, he gives his thoughts on Japanese spirits and what British bartenders could learn from their Japanese counterparts.

Scotland is the home of Scotch whisky – does this mean bar and pub operators are more or less open to stocking Japanese spirits than elsewhere in the UK?

“Scotland is a beautiful country, and there’s no denying that their whisky is beautiful too. But whilst Scotch will undoubtedly continue to perform well within the Scottish on-trade, in my experience operators always stock spirits that they believe will give customers a truly special experience – and that includes Japanese whisky.

“Of course, that hospitality is tempered with good old-fashioned competitive spirit and patriotism, so you’ll almost always see a far greater number of Scottish spirits than Japanese. The demand is so great for Suntory, though, that more places than you might imagine have a bottle on the back bar – when they can get their hands on one!”

What differentiates Japanese-made spirits from those distilled in the UK?

“In Japan, craftspeople follow the theory of Kaizen, which means continuously improving everything that you do.

For us at Suntory that means constantly challenging convention and using craft methods to add complexity to our spirits. For example, rather than using stills that are the same size and shape, each pair of stills at our distilleries are unique, allowing us to create a myriad of subtly different whiskies to blend for complex end products. A great example of this is Toki, which launched in the UK last year.”

Are there particular styles of venue in Scotland that Edrington-Beam Suntory is targeting with its Japanese spirits?

“Not at all. We work with anybody who appreciates what we are creating, which really can be any sort of venue. It’s a premium product with premium design, but affordable for anyone who wants to try something special. So whilst it does sit in the higher end of venues, this is not exclusive.

“We know that consumers have a hunger for gin at the moment, especially within the premium and super-premium gin category. Our premium Japanese gin, Roku, is stocked in many bars across Scotland, with our signature serve the Japanese G&T the perfect highball coming into summer.”

What about serves – are the spirits being promoted to bartenders in particular long drinks/cocktails?

“The Japanese tend to drink whisky either neat, over ice or in a highball with soda. We have created some whiskies that are specifically intended to be drunk in highballs but they are wonderful sippers too, so we recommend trying it both ways. Toki is also great frozen, especially when used in cocktails.”

You spent time bartending in Japan. What strikes you as the biggest differences between the Japanese cocktail scene and the one here in the UK?

“In Japan the culture revolves around Kaizen. You learn skills from a master of their craft, but don’t actually make a drink in the bar until you’ve mastered them too.

“It’s a slower and humbling learning process, which leads to perfect classics, but there’s less focus on creativity and modernism. It’s also far more focused on the beauty of the process, whereas here in the UK it would be hard to get away with spending time crafting something truly perfect when people are in a rush to get served as quickly as possible.”

What were the most important skills or knowledge you picked up there?

“First and foremost, humility. In the UK we are all so focused on the next big thing and whether we can get involved, and on what we can do to impress our peers.

“In Japan, respect is revered far more highly than simply impressing for a moment. “Respect lasts, whereas our idea of ‘impressive’ evolves as soon as something more exciting comes along. This changes everything, because respect is earned only after years of working hard and proving your commitment to true hospitality and the craft of making special moments for people.

“So, humility abounds; there is no room for arrogance when your sense of achievement is based on improving yourself by improving other peoples’ experience of you.”

What can Scottish licensees do to promote Japanese spirits in their premises?

“Talk about them! Educate yourselves so you understand better what makes them different and special. Avoid the idea of a competition between Scottish and Japanese spirits; allow them to sit side by side and remind your guests that by appreciating both we can understand and enjoy them for their differences all the better.”

What support is Edrington-Beam Suntory providing to Scottish venues to help them highlight Suntory’s Japanese spirits?

“We provide support in a collaborative way. There isn’t a one-size-fits-all solution, each venue has its own needs.

“We try to get to know the venues that work with our products as well as we can to find the best way to support them, whether that’s with our amazing POS, great glassware, events, trainings and menu development. We work in partnership with our customers to create something truly special together.”

What is your personal favourite Japanese spirit, and how do you like to drink it?

“Whisky, of course. For me, Yamazaki 12 or Hibiki Harmony take the top prize. The older whiskies are outstanding, but for special moments. Normally it is either neat or ice cold with soda, the Japanese way. But if you really want to try something special, the special Mizunara release for Tokyo Bar Show several years ago is probably the most complex whisky I have had the fortune to taste.”