Community pub encapsulates the best of the trade

EVERY pub has its regulars; but not every regular would be willing to save their pub from closure.

Yet in 2011, when the lessees of the then Buchanans on Paisley’s Old Sneddon Street shut up shop, manager Margaret Patterson found herself in a fairly unique position.

Having operated the pub for close to two decades for various bosses, she was approached by a customer who longed for its return.

“One of my old regulars, Bruce Habbick – when they closed down here they moved to [another place] in Paisley – he missed his pub,” Margaret told SLTN.

“So he got in contact with me and said, ‘come on, we’ll try and open the old pub back up’.”

After negotiating the lease with Network Rail, which owns the building  (it sits beneath the railway line), Bruce and Margaret had to acquire the relevant licences and, ten months later, reopened the pub as The Patter Bar.

“It was a big achievement for us,” said Margaret, who admitted that renaming the pub was relatively straightforward, “because my name is Patterson – and they’re all full of patter in here, so I thought it was a good name”.

Six months later, Bruce handed the reins over to Margaret, who became the sole lessee.

“Bruce is still the heart and soul of the place, [though] he doesn’t get out as much due to ill health,” said Margaret. 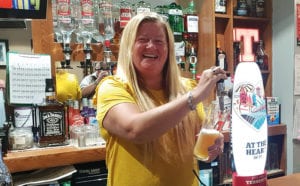 “He left everything to me. “That’s why I call him my wee guardian angel, because we wouldn’t have this place if it wasn’t for him.”

The pub itself is more than just a venue for the locals to enjoy a pint, said Margaret: it’s closer to a family.

“It’s a wee community pub; they all look after each other,” she said.

“We’ve got a wee book that I keep the phone numbers in. The older ones, if they’ve not been in, I’ll phone and make sure they’re alright or I’ll go looking and take them to hospital appointments, things like that.”

A strong sense of community can also be found in the pub’s approach to charity, which underpins much of the operation.

As well as smaller, kind gestures, such as buying reduced food at the cash and carry and offering it out to regulars who may need it, Margaret and her loyal customers regularly crowdfund for various charities in the town.

“We try and do anything for local charities,” said Margaret.

“We collect for food banks in Paisley.”

Recently the pub held a charity event for A Helping Hand Paisley – a local not-for-profit charity that aims to help homeless and families in crisis – and raised £1800.

It’s a wee community pub; they all look after each other in here.

The pub digs deep for other local causes too.

When a flat on the town’s Stock Street went on fire just weeks before Christmas last year, Margaret and her regulars rallied to raise funds for the family.

And when a couple of The Patter Bar’s customers, who were expecting their first baby, lost out when a local shop closed, a whip round ensued, with the new parents gifted a pram, cot, high chair and clothes.

Despite her charitable efforts, Margaret admitted she was shocked when she learned of her nomination for SLTN’s 2018 Unsung Hero Award, in association with Hugh Stirling.

So shocked, in fact, that she initially didn’t believe the emails about the nomination were genuine.

“I was on holiday and I received an email and I thought it was one of those dodgy spam things,” she said.

“And I was getting this phone number calling and I didn’t know the number and because I was in Turkey I thought ‘I’m not listening to the message because it’ll cost me a fortune’.”

We try and do anything for local charities and collect for food banks.

However, after her daughter told her to keep an eye out for an email regarding the SLTN Awards, Margaret realised it was genuine.

“It was about two days after I got home (from Turkey) and the [judges] came in and I said, ‘I didn’t realise they’d done this’,” said Margaret.

“I did get a bit emotional.”

More surprise was to follow when on November 1 last year, at the awards ceremony itself, Margaret was crowned SLTN’s 2018 Unsung Hero.

“They said my name and I froze in my seat,” she said.

“My partner Felix said, ‘that’s you!’. I got up and back down; my legs were like jelly.

“It was a lovely surprise. We can’t thank Hugh Stirling enough for sponsoring it, because it was amazing.”

Having worked behind the bar for 25 years, Margaret said there’s nowhere else she’d rather be – and intends to continue supporting regulars and locals alike.