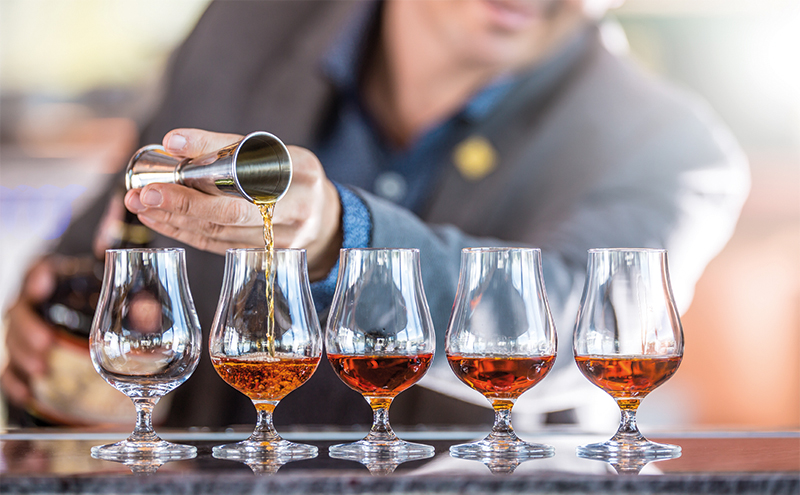 And as the rum category grows in the country’s on-trade, in both sales and breadth, prudent publicans have been urged to prioritise a similarly educational approach to the spirit in their outlets.

Just as whisky and gin tastings have become commonplace in bars in recent years, the same idea should be applied to rum to acquaint customers with all the drink has to offer, according to Collin van Schayk, director of Orkney-based VS Distillers, producer of J. Gow Rum.

He said: “Rum tastings are always popular, they are a good way to educate the consumer on the many different styles of rum.

“It’s also a great way of introducing the casual rum drinker into some new styles and brands.”

Following in a similar vein, Paul Stanley, director at Cloven Hoof Rum, said consumers have to be “encouraged to try rum by bar staff in the way that people are offered tasters of beer on tap”.

“So many people haven’t experimented or tasted rum since their alcohol-fuelled youth and immediately put the taste barriers up when the word rum is mentioned,” he added. “There’s a rum out there for every palate.

“If bar staff can engage with customers more and offer small tasters then people will be converted.”

And Bacardi’s UK brand ambassador, Metinee Kongsrivilai, said it is important that bartenders “can speak with passion and authority about the different rums that are on offer”.

“It’s important to help customers understand the differences between rums and find the ones that are most pleasing to their palates,” said Kongsrivilai.

“A good bartender should be an encyclopaedia on the spirits they have behind their bar.”

The spirit’s strong showing in Scottish bars, particularly in cocktails, shows the demand for a bigger focus on the spirit is there, said Johny Hume, on-trade development executive at distributor When We Are Giants, which counts rum brands Red Bonny and Kirk & Sweeney within its portfolio.

He said: “Rum is performing very well within Scotland. The country’s fondness with rum dates back to the 17th century ‘sugar boom’.

“With key cities like Edinburgh leading the way in cocktail trends it has shown a great importance on cocktail menus.

“Gold and dark expressions still lead the way but the accessibility of white rum in simple serves is becoming apparent.”

Another way of making rum, in all its variety, more accessible is to introduce different styles to consumers in a short list of simple serves, said drinks firms.

This can also boost overall rum sales, said van Schayk of VS Distillers.

“Rum and ginger beer is always in demand, but with the ever-growing premium mixer category there are some amazing flavours out there that work incredibly well when paired with the right rum,” he said.

“Switching out a light or white rum for a heavier Jamaican-style rum can help to put a twist on a classic cocktail.”

This was echoed by Geoffrey Robinson, UK brand ambassador for rum producer Santa Teresa, who said the spirit is “so versatile and so can be used in such a great variety of modern and classic cocktails, including drinks that you might traditionally associate with other spirits”.

Hume of When We Are Giants counselled licensees to keep their serves “simple but do it well”.

He added: “Use the best ingredients you can to produce the best drink to your ability.

“Nothing beats a well-made ice cold Daiquiri or a Dark & Stormy.”

Deciding what to stock in bars as the category expands can be challenging.

However, Sophie Lawrence, PR manager for Sovereign Brands, distributor of Barbados rum brand Bumbu, said stocking the unfamiliar can create a point of difference for venues.

She said: “Don’t stand still; innovate and don’t be afraid to try something new. There’s nothing worse than seeing the same products on the back-bar that you saw and drank ten years ago.

“The consumer wants to be excited and they want to learn.”

And don’t forget to tick all the boxes, said Pavol Kazimir, global brand ambassador for Brugal.

“A portfolio is complete once it has sweeter and drier; heavy, medium and light ones; and simple and complex rums on offer.”