THE port of Leith has a long association with Scotch whisky.

From the thousands of casks that matured in the area’s whisky bonds to the blending operations and whisky-producing distilleries that once populated the district, Leith was at one time synonymous with Scotland’s spirit.

This year two childhood friends will take a step towards reviving that tradition when they begin construction of a new, £10 million distillery in the historic port.

Ian Stirling, who formerly worked in the wine industry, and Paddy Fletcher, an accountant, have known each other since primary school and spent the past six years raising funds and securing a location for their distillery.

After a series of setbacks which saw the pair lose, at different times, investors and their first site, the friends and business partners expect to commence construction of the Port of Leith Distillery in March.

The facility, located on the Leith harbour-side, next to both the Ocean Terminal shopping centre and the Royal Yacht Britannia, is described as Scotland’s first ‘vertical distillery’, with each floor of the building dedicated to a stage of the production process.

But what could really set it apart is the approach to fermentation.

By law, malt whisky has to be made from only three ingredients: malted barley, yeast and water. The barley is malted, dried and ground before being mixed with hot water in order to create a sugary liquid called wort. This is fermented to turn it into alcohol – the ‘wash’ – and then distilled twice to create new make spirit.

Stirling and Fletcher have always been particularly interested in the fermentation stage of the process, and have secured a grant from UK government agency Innovate UK to experiment with different types of yeast in fermentation and distillation.

The two-year project will be carried out in conjunction with Heriot-Watt University.

“We’re going to be trialing a whole load of different yeast [varieties] that haven’t been used,” said Stirling. 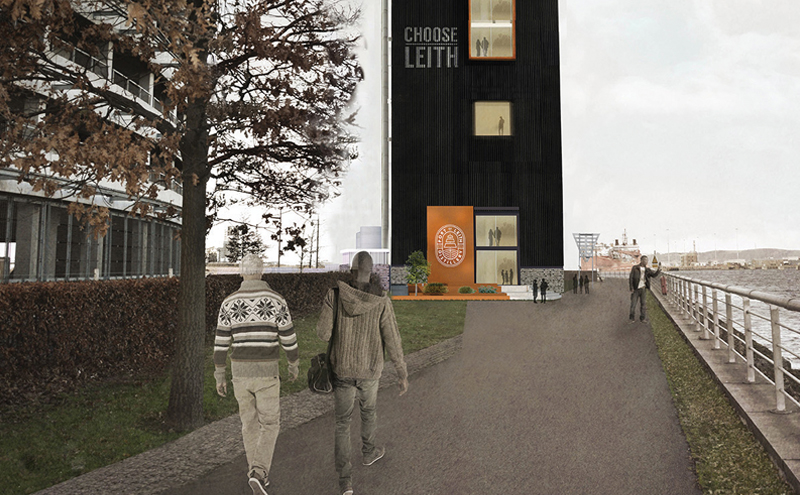 “So that when our distillery has finished construction in the autumn of 2020 we’ll have a good deal of research behind us and know where we’ll want to go with our whisky.”

Because the goal will be to establish a good deal of the whisky’s flavour during fermentation, Stirling said he expects to produce a light spirit, matured predominantly in ex-bourbon casks but with a light sherry influence.

“It’s in the fermentation when you create what you call primary fruit flavours – the ripe peach, the apricots, the crisp apple flavours that might come through in a whisky,” said Stirling.

“If you put that in a really sherried cask it’ll get completely dominated by the cask. For us the watchword we’re bringing to our whisky – and this is something I’m taking from the wine world – is ‘balance’.

Construction of the distillery is expected to be complete in 2020. In the meantime, Stirling and Fletcher have established a smaller distilling operation in Leith and released two products under the Port of Leith name: a gin the company is distilling itself and a sherry sourced from Jerez and bottled in Leith.

Although a distinct product in its own right, the Port of Leith sherry has a link to the distillery’s future spirit.

“Sherry plays such a crucial role in Scotch whisky production, and so we thought we should give our consumers the chance to taste the sherry from the bodega whose casks we would use (for maturation),” Stirling told SLTN.

“We thought that would be a really interesting thing to do from a whisky production perspective and also give a new angle on sherry.

“And it also helps forge a really strong relationship with that bodega.”

The label on the bottle details how the sherry is produced, as well as the historic links between the Spanish-made fortified wine and Scotch whisky.

“Leith played quite an important historical role in that regard, because the whisky merchants would store their spirit down here,” said Stirling.

“Sherry came off the ships, was decanted into bottles, and whisky merchants took the empty casks.

“Before long they discovered customers kept coming back for the whisky that had been in the sherry casks, which is really where the [use] of the sherry cask in whisky production came from.”

Released last summer, the first batch of the sherry proved more popular than Stirling and Fletcher had anticipated – helped by Edinburgh bars such as Nauticus using it as an ingredient in cocktails.

Stirling said: “The market for sherry is not massive, but we were just doing it as a labour of love and to help get the story out there.

“But it’s proving to be really popular because there is a real movement in bars using sherry as a cocktail ingredient. It gives this incredible nutty undertone to drinks.”

Dr James Lind was the Edinburgh-born doctor who, in the 1700s, established the effectiveness of lime juice in treating scurvy.

The Lime part of the name also references Rose’s Lime Cordial, which was created in Leith by Lauchlin Rose in the 1800s.

The spirit itself is produced in partnership with local distiller James Porteous of Electric Spirit Co.

Porteous had been looking to expand production of his small-batch gin and so the Port of Leith team proposed a partnership: they would provide the funding for a new distillery if he would distil their gin as well as his own. The Tower Street Stillhouse was born shortly after.

Although the Port of Leith distillery won’t be open until next year, Stirling said it is “sort of step one” in the pair’s plans, with ambitions to produce and bottle other drinks in the years ahead.

“But we’ve got enough to keep us busy for the time being,” he said.