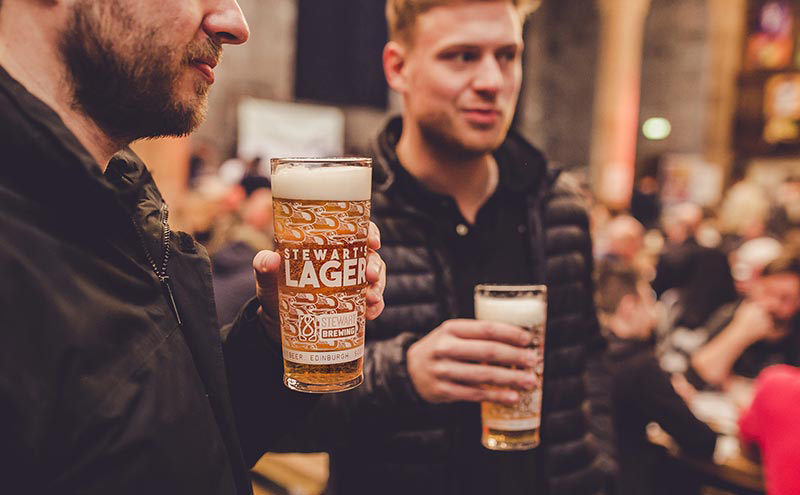 MIDLOTHIAN-based Stewart Brewing is set to add a bit of zest to this year’s festive beer offering as it gears up to launch a tangerine IPA in time for Christmas.

The limited edition release, which was yet to be named as SLTN went to press, is described by Stewart Brewing’s co-founder, Jo Stewart, as a 4.8% ABV “easy drinking” beer that “is going to be full of flavour – and just has that little bit of festive feel to it”.

Set to launch towards the end of November, the seasonal IPA will be available to pubs in both cask and keg, as well as in 500ml bottle format.

Jo told SLTN that the goal is to offer something “a little bit different” this year.

“What we’ll try to do is we’ll use quite a lot of citrus-style hops in it, so we’ve got loads of citrus flavours coming through from the hops – then we’ve also got some tangerine juice that’s coming in to infuse that as well.

“We try to bring out a new [festive] brew every year. This year [it’s] a tangerine IPA. Hopefully it’s going to be a little bit different and sell really well for us.

“We find with the beer styles, the popularity of IPAs and pale ales just seems to be never waning, so we thought we’d try an IPA this year.”

But that’s not all that Stewart Brewing has been working on.

Earlier this year, a new experimental series dubbed Project 7 got off the ground.

Its goal? Pushing the boundaries of craft beer and giving the company’s brewers the chance to flex their creative muscles.

Headed up by two of the company’s brewers, Tom Dixon and Joe Baldwin – the latter has since taken up the role of Project 7 business development manager – the new series gives the brewers the freedom to create new and unusual beers that test customers’ perceptions of craft beer.

For instance, the first release from the project, Voss IPA, which was launched earlier this year as a limited edition beer, is a 6.5% ABV IPA brewed with a Norwegian farmhouse yeast strain (Voss Kveik); it is said to give the beer notes of marmalade, spice notes and “a fresh hoppy finish”.

We want to be a progressive, innovative brewery – so we want to keep developing new beer.

It is set to be re-released, with another two beers also set to follow: Cucumber Gose with Seaweed, which is a 5% mixed fermentation sour; and an 8% “hazy New England-style double IPA”.

In total, ten brews will be released under the Project 7 label, all in 440ml can format, with the more popular variants in with a chance of being added to Stewart Brewing’s permanent line-up.

It’s all about remaining at the fore of the craft industry, reckons Jo.

“We want to be a progressive, innovative brewery, so we want to keep developing [new] beers,” she explained.

“So we’re trying to keep ourselves at the top of the craft brewing scene, but still service the more traditional cask ale pubs in Edinburgh.

“We don’t want to get left behind; we want to be at the top of the game.”

And after a year of strong growth, which included Stewart Brewing picking up the Scottish Brewery of the Year at the 2018 Scottish Beer Awards, Jo told SLTN there are plenty more growth plans in the pipeline – chief amongst which includes a new on-site warehouse, six new beer tanks and an extension to the existing brewery bar.

“The plan is to keep us on that trajectory.”