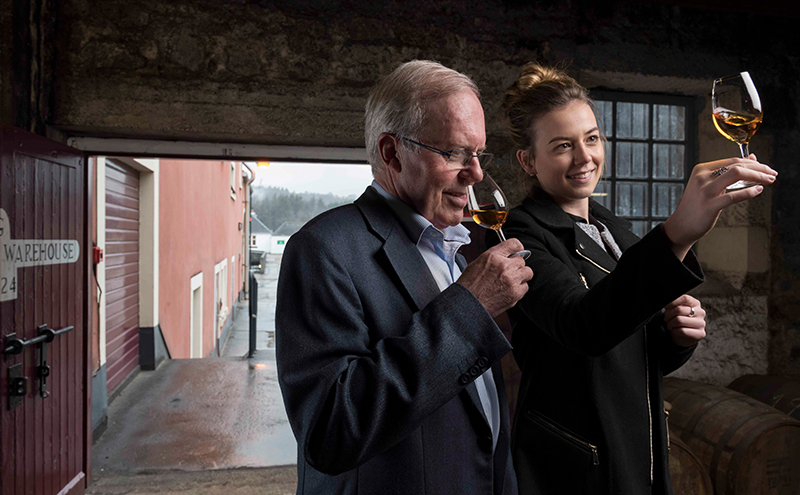 THE man that’s claimed to be the longest-serving malt master in Scotch whisky will pass the knowledge gathered in the course of his 50-year career onto a new generation with the appointment of an apprentice.

David Stewart, malt master of William Grant & Sons-owned single malt The Balvenie, has worked in the industry for 56 years, having joined the family-owned firm in 1962 as a whisky stocks clerk.

He was appointed master blender of The Balvenie after a 12-year apprenticeship with former master blender Hamish Robertson and has  since gone on to mentor Glenfiddich malt master, Brian Kinsman, who worked and studied under Stewart for eight years.

The 25 year old, from Glasgow, has worked with the company since August 2014 as a whisky technologist.

Having graduated from the University of the West of Scotland with a degree in biology and biological sciences, McKechnie progressed to studying brewing and distilling at Heriot-Watt.

Although I’m a scientist by trade I really enjoy the emotional response that whisky can bring.

During her studies she joined William Grant & Sons as a technical graduate and whisky technologist, shadowing Stewart as he created expressions including The Balvenie Peat Week Aged 14 Years (2002 and 2003 Vintage), The Balvenie DoubleWood Aged 25 Years and The Balvenie Fifty: Marriage 0962.

She also spent time with Kinsman as he developed spirit for Glenfiddich, as well as other William Grant brands Monkey Shoulder, Tullamore DEW and Milagro Tequila.

As Stewart’s apprentice she will work with him to ensure consistency in each bottling of The Balvenie, developing new expressions of the single malt, and caring for the distillery’s extensive whisky stock as it matures.

Stewart described the appointment as “a once in a lifetime opportunity” for anyone in the whisky industry and heaped praise on his new apprentice.

“To achieve this at just 25 years old is testament to Kelsey’s abilities,” he said.

“She is a precocious talent; with a real flair for distillation, a dedication to her craft and a self-assurance and poise that completely belies her young age.

“She has also shown that she has an expert palate and skill for nosing and assessing whisky, which combined with her natural abilities and academic background made her the ideal candidate to be my apprentice.

Kelsey is a precocious talent with a real flair for distillation, assurance and poise that belies her age.

“I very much look forward to mentoring Kelsey as she continues her journey into a world of distilling and maturing whisky.”

McKechnie said her appointment as apprentice is “both an incredible honour and a privilege”.

“One thing I really love about nosing and tasting different whiskies is the memories it immediately invokes,” she said.

“I’ll always remember the first sip of The Balvenie whisky I tasted. It was up at the distillery and just the smell alone took me straight back to spending time with my family, in particular with my grandfather.

“Every bottle makes me think of something different and although I’m a scientist by trade, I really enjoy the emotional response that whisky can bring.”

The distillery itself lays claim to being the only in Scotland that grows its own barley, uses traditional floor maltings and employs both coppersmiths and coopers on site.