New product has a Scottish head and a Mexican heart

LET’S get this out of the way early: tequila is a distinctly un-Scottish spirit.

Traditionally produced in and around the Mexican town of Tequila, the liquid is created by fermenting and then distilling the juice of blue agave plants.

So far, not particularly Caledonian.

However, an Aberdeen entrepreneur has found a way to inject some Scottish flavour into Mexico’s most famous export.

Michael Ballantyne came up with the idea for UWA Tequila – a range of tequilas produced in Mexico and aged in whisky casks from Speyside – after a trip to Mexico to visit his mother and step-father.

While there, he met master distiller Luis Trejo of La Confradia distillery, who properly introduced him to tequila and explained the production process.

“I said to him ‘wouldn’t it be kind of cool if we could put our national drinks together somehow?’,” Ballantyne told SLTN.

I was saying to my friends ‘just drink it like a malt’ and a lightbulb went off.

“I was saying to my friends back in Aberdeen to just drink it like a malt, and a lightbulb went off and I thought, ‘why don’t I just put it in single malt barrels?’”

Having sourced casks from a Speyside cooperage and sent them to Mexico to be used for maturing tequila, Ballantyne quit his job in the oil and gas industry and took a gamble on his new venture.

“You almost have this journey,” said Ballantyne.

“The barrels have been made in America, [matured] bourbon, brought to Scotland for single malt, and then I take them and send them to Mexico.

“So you’ve almost got three different drinks in one bottle, which is pretty cool.”

Ballantyne chose Speyside casks because he reckoned the flavour profile of Speyside whiskies was the best suited to La Confradia’s tequila. 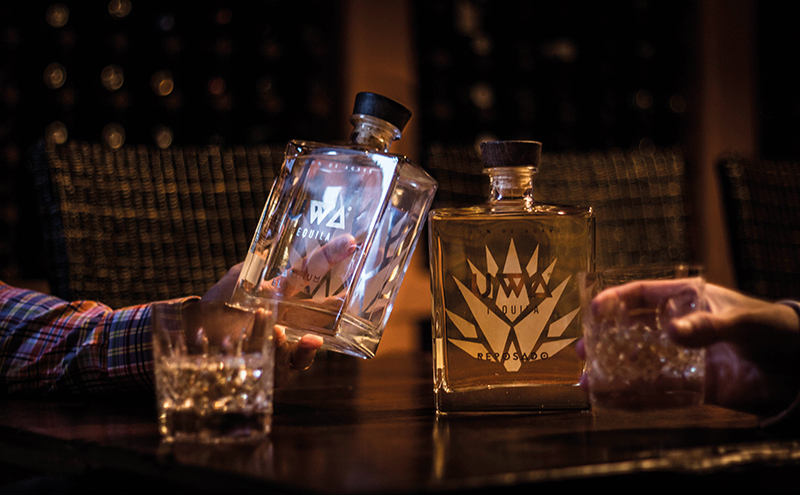 “Highland agave is generally sweeter than lowland, and lowland is quite earthy – it’s got more spice to it.

“Because I was using a lowland agave, I wanted to balance it out with a sweeter barrel, and I thought a Speyside would be a better way to go for flavour profile.”

The first batch of UWA was launched during London Fashion Week in December 2017 and is now almost sold out, said Ballantyne, with the second batch about to arrive in Scotland at the time of the conversation.

In addition to producing more of the core range, Ballantyne is keen to experiment with different casks and spirits.

We want to pull people into the idea of tequila being a go-to sipping drink.

He has already secured some Oloroso sherry casks and will be producing a limited, 600-bottle run of tequila matured in those casks in the near future.

He also has plans to acquire some peated casks from Islay to use for maturing mezcal – which he reckons will be more complementary to the Islay flavour profile.

“We really want to do experimental things, things that are really different,” said Ballantyne.

“We want to keep it fresh, new and exciting and try and pull people in to the idea of our tequila being a go-to sipping drink. So you’d enjoy it like you would a malt.”

Though he acknowledges that promoting tequila in Scotland and the UK, where it is often associated with bad memories caused by ‘slammers’, is a bit of an uphill battle, Ballantyne reckons the perception of the spirit is slowly starting to change.

“It’s going in the right direction but, educationally, it’s a strong push to try and get people round to sipping it rather than shooting it,” he said.